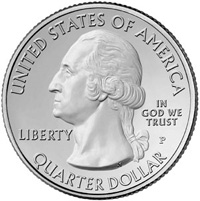 The America the Beautiful Quarters Program is currently within its third year of release. The series is scheduled to run from 2010 to 2021, featuring a different national park or site from each state, territory, and the District of Columbia. For the first two years of the series, mintages were at extremely low levels on a historical basis. The production levels for the start of the third year have moved even lower.

Shown below are the final mintages for the 2010 and 2011 America the Beautiful Quarters and the preliminary production figures for the first two releases of the series during 2012. The figures for this year should be considered preliminary as the US Mint reserves the right to restart production of previous designs during the calendar year of issue.

The reasons for the minimal production of the current series can be traced back to the previous State Quarters Program. During the course of the ten year series, production levels for the denomination were much higher than had typically been the case. The series caught the attention of the broader public and many examples of the new coins were taken from circulation and held in collections. Federal Reserve Banks were also given the ability to order unmixed quantities of each State Quarter during a specified period, which served to create additional demand for newly minted quarters rather than existing inventories of older quarters. 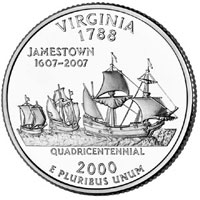 The highest mintage for the State Quarters Program was achieved with the 2000 Virginia Quarter with a circulation mintage of 1,594,616,000. This amount represents at least five quarters for every man, woman, and child living in the United States.

By the end of the program, the US Mint had produced more than 34 billion State Quarters for circulation, compared to about 14 billion produced in the prior ten year period. The US Mint touted its success for generating seigniorage of $2.7 to $2.9 billion from the extra production.

With some of the novelty gone from collecting circulating coins with rotating designs and a downturn in the economy, a great deal of the extra production from the State Quarter years flowed back to Federal Reserve Banks, creating a large overhang of supply. While much has been said about the $1 coin hoard, Federal Reserve Banks are also apparently sitting on a State Quarter hoard, which continues to be slowly worked away over time.

Until this hoard of quarters has been reabsorbed into the channels of commerce over time, production levels for the new America the Beautiful Quarters Program will continue at extremely low levels. Of course, during this time seigniorage generation for the denomination will also be extremely low, eliminating much of the great financial boon generated by the State Quarters Program.