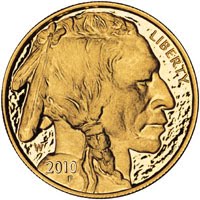 On Wednesday, July 21, 2010, the United States Mint reduced the prices for available numismatic gold coin offerings. The price decrease follows the recent general decline in the price of gold.

Although a few new aspects of the policy were recently revealed, the US Mint generally bases prices on the average London Fix prices from the prior Thursday AM to the current Wednesday AM. If the average price is within a different range (and the Wednesday PM Fix price agrees), then prices are adjusted accordingly.

The current numismatic gold coin offerings from the US Mint include the 2010 Proof Gold Buffalo and four different First Spouse Gold Coins.  The proof Gold Buffalo was initially released on June 3, 2010 and contains one troy ounce of 24 karat gold. The initial price of $1,510 had remained in place until this week.

The First Spouse Coins are released periodically throughout the year, in a schedule roughly following the Presidential Dollars. Current releases feature Sarah Polk, Margaret Taylor, Abigail Fillmore, and Jane Pierce, available in proof and uncirculated formats. The most recent coin was released on June 3, 2010, priced at $779 for proof coins and $766 for uncirculated coins. This represented the highest starting price for any release of the series to date.