The Whitman Expo in Baltimore, held this year from November 3 to November 6, always sees several auctions being held, and this time is no exception. Stack’s Bowers will hold three different auctions offering United States coinage and United States paper money as well as a separate auction held in conjunction with the annual convention of the Colonial Coin Collectors Club (also known as C4). In this preview article we will take a look at some of the highlights spread out across those three catalogs. All lots discussed in this article, as well as all other lots in the sale, can be viewed on the Stack’s Bowers website in full detail.

The rarest American coins are offered in session 3, also known as Rarities Night. This sale offers just 196 coins, but includes several rarities that are seldom encountered in the marketplace. One such coin is offered as lot 2057, an 1874-CC Liberty Seated dime graded AU-53 by PCGS. The Carson City Mint produced just 10,817 dimes for circulation that year—a tiny number compared to the output at, for example, the Philadelphia Mint. Virtually all that were struck entered circulation, and while low-grade examples are sometimes seen, even a piece grading Very Good or Fine is considered a numismatic rarity. Higher grades such as this AU-53 are very infrequently encountered, and when they do show up they tend to attract a lot of attention from Liberty Seated and Carson City specialists. While the exact number of survivors is unknown, estimates tend to range from 35 to 50 coins in total, of which only a select few grade above Extremely Fine. (See A Guide Book of Liberty Seated Silver Coins, by Q. David Bowers, for more information.)

The 1916 Standing Liberty quarter is a classic 20th-century key date, and one of the coins being celebrated this year in a 24K gold Mint commemorative trio. While survivors do show up, most are in lower grades, and few reach the level the coin offered as lot 2071 does. Graded MS-67 FH (Full Head) by PCGS, this rarity is surpassed in the population report by just a single finer example. The coin is a survivor from a small mintage of just 52,000 pieces, and from that mintage just four coins have ever been graded MS-67 FH by PCGS. The population of this coin in that grade has remained the same for a few years, making it unlikely that many more will be graded in the future. The coin features a very sharp strike for the issue, essentially mark-free surfaces, and pleasing light toning that combine into a coin that not only has tremendous eye-appeal but is one of the ultimate type coins a collector could hope to acquire. (See here for a story on how to collect the Standing Liberty Quarter on a budget.)

Lot 2082 is another very scarce coin, but this time from the 18th century. The 1794 Flowing Hair half dollar is a well-known coin that is on the wish lists of many collectors, as its silver-dollar counterpart is prohibitively rare and out of reach for most. Problem-free survivors of this issue are always in high demand, and while Good and Very Good examples are generally available, an original Very Fine or Extremely Fine is a different story. This particular coin is a fully original VF-25 graded by PCGS. It has nice, steel-gray surfaces, lightly marked (as can be expected for the grade), with overall excellent eye-appeal. While type collectors will often settle for the more readily available 1795 date, there’s something about a first-year-of-issue coin, and this example should see spirited bidding when it comes up for sale.

Error coins are a subfield of American numismatics with a very dedicated following, even though one just never knows what will show up. Lot 2194 is such a coin, and one has to wonder if a Mint employee perhaps had a hand in this (the answer is probably yes). It is a 1979-P Susan B. Anthony dollar overstruck on a 1978 nickel, graded MS-67 by NGC. Such double-denomination errors are extremely rare, and are caused when an already-struck coin of one denomination gets used as a planchet for a second denomination. In this case, an already-struck Jefferson nickel was used as a planchet for the Susan B Anthony Dollar, perhaps intentionally, and then carefully saved (as the high grade will attest). Plenty of detail of both types is visible, and while not all collectors will appreciate the rarity of this error, those who consider themselves specialists in the field certainly will. 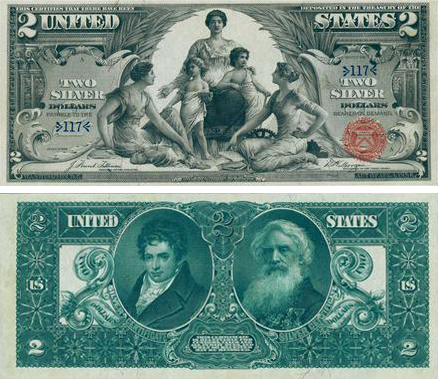 The final lot we will take a look at is one from the U.S. currency auction (session 5 of the sale). The so-called Educational Series of 1896 consists of large-size banknotes in the $1, $2, and $5 denominations (larger denominations were also planned but never materialized). The series received its name for the vignette of the $1 denomination, called “History Educating Youth.” Lot 10226 of the Stack’s Bowers sale is an example of the $2 Silver Certificate, which had a central vignette called “Science Presenting Steam and Electricity to Commerce and Manufacture.” The piece, identified in the Friedberg catalog as number 247, has been graded Gem New 66 PPQ by PCGS Currency and has the low serial number 117, meaning it was among the first sheets printed and carefully set aside as a souvenir of this beautiful issue. A very popular but short-lived series, this is a collector favorite, and when one studies the beauty of this 19th-century banknote it is not hard to understand why.

The Educational Series and other collectible bank notes are covered in a variety of Whitman books, including the Guide Book of U.S. Paper Money, by Arthur L. and Ira S. Friedberg, and A Guide Book of United States Currency, by Kenneth E. Bressett.