Numismatics is a hobby which includes many different aspects and can be a widely varied field of study. This is something that is obvious at many major shows, where dealers offer different items, ranging from modern US coins to esoteric foreign items few might know about. The 2015 New York International Numismatic Convention auction by Stack’s-Bowers, held on January 9, 10 & 12 also proves this point well. Two different catalogs offer a wide variety of items, ranging from ancient coinage to modern world currency. In this article we will take a look at two specialized collections that are being offered, both focusing on a collecting specialty that some collectors might not be familiar with: The John W. Adams Collection of Spanish Colonial Medals (lots 1001 to 1057) and the Stanley Aberdeen Collection of Swedish Plates (lots 1635-1724).

Spanish colonial history includes several hundreds of years in which South and Central America was conquered and settled by Spanish conquistadors and their successors. A world away from Spain, the people in the new world were subjects of the same king as those in the old world, and the inauguration of a new king was cause for many festivities on both sides of the Atlantic. During these large and exorbitant (at times) celebrations special medals were often struck by several entities, such as churches or colleges. These medals are the subject of the John W. Adams Collection that will be sold by Stack’s-Bowers. 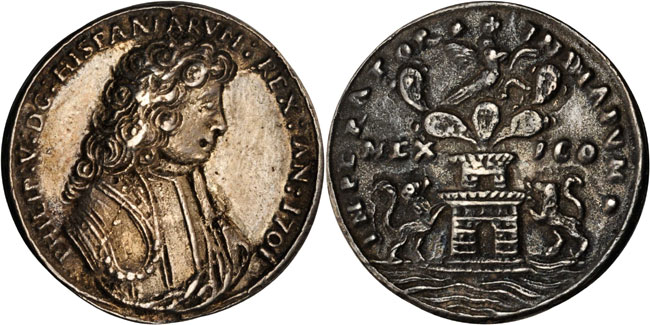 The collection includes examples from many countries and cities spread throughout the Spanish New World, such as Mexico, Cuba, Guatemala, Peru and others. The first are those related to the inauguration of Philip V, who was king of Spain from November 1700 to 1746, except for a brief period in 1724, when he abdicated in favor of his son, Luis I. Many of these pieces are extremely rare; not only were the medals seldom cared for by the recipients, many of such medals were melted at later dates to provide metal for other (proclamation) medals, and many were holed to be worn in support of the new king. Luis I passed away nine months after he became king, and his father once again took the throne until his death in 1746. The Adams collection contains examples of both Philip V and Luis I. Also included are later pieces, issued to commemorate the kings Ferdinand VI (ruled 1746 to 1759) and Charles III (ruled 1759 to 1788). While some are common and relatively affordable the majority of the (larger) medals are prime rarities that are seldom offered for sale. 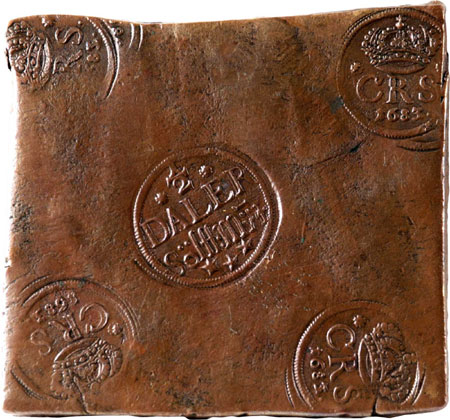 Another specialized collection includes 88 examples of Swedish Plate Money, a unique coinage that was issued by Sweden between 1664 and 1776. Consisting of large plates of copper of varying weights and sizes, they were stamped with various denominations (generally five stamps total, with the denomination at the center of the plate) and were often valued based on their weight, which fluctuated with the price of copper in the overall European market. Sizes varied from approximately 4×4 inches for the smallest denominations to massive slabs weighing almost fifty pounds. The plates were a result of the chronic shortage of silver in Sweden and an overabundance of copper, the result of large copper mines that were in full production in the 17th and 18th centuries. While rather unconventional for the traditional numismatist, the plates are a very interesting part of Swedish numismatics and are often collected along more traditional coins.

The collection that will be sold by Stack’s-Bowers includes numerous very rare pieces, including some that were made from cannon metal, acquired in wars in which Sweden was involved, such as the Great Northern War (fought 1700-21). Many of the examples known were recovered from the wreck of the Nicobar, a ship of the Danish East India Company, which sank off the coast of South-Africa in 1783. Even though the plates had been demonetized at that point (in 1776) the Swedish plate money was still valued and traded as copper ingots. Of course, grading of these pieces is rather rudimentary (even though the plates were used as currency many of the stamps rarely show actual wear, and the quality is often determined by the strength of the impressions on the face of the plates) many sold in the Stanley Aberdeen Collection are well impressed, appealing pieces of this somewhat odd form of money. Both collections are interesting parts of numismatics that are not studied as extensively as traditional coins, but should see a lot of interest from collectors from around the world.