As part of the Long Beach Coin Expo held from January 29 to 31 in Long Beach, California, Heritage Auctions is holding a signature auction, offering US coins. A total of 2656 lots are offered in a number of different sessions. In this preview we will take a look at 5 selections that will be offered in a floor session on January 29. The coins are grade or date rarities that are seldom offered for sale, and as we will see there are perhaps even some unique coins included in the sale.

Lot 3019 is the sole 1905 Indian Head Cent known to be struck on a gold planchet that was intended for the quarter eagle denomination. In the series there are a total of five such pieces confirmed to exist; three are dated 1900 and one each dated 1905 (the piece offered) and 1906. The Pollock reference on United States patterns suggests that a 1907 dated piece might exist, but the whereabouts of that piece is presently unknown.

The status of these pieces is generally debated. Some pieces might have been struck as errors, when a gold planchet got mixed in with the planchets for the Indian Head Cents that were about to be struck. Another option would be that a Mint employee struck the gold Indian Head Cents, perhaps by request from a collector who was willing to pay a strong price to the Mint employee. While the latter might be true for the 1900 dated examples (which vary in weight) the 1905 and 1906 examples weigh exactly as much as a quarter eagle of the period should weigh. Either way a few pieces did escape the Mint of which this 1905 PCGS MS64 is generally considered the finest known. A single 1900 dated piece is graded PCGS MS65. This is the second time that this 1905 gold Indian Head Cent is offered for sale, after it sold for $253,000 in January 2010. 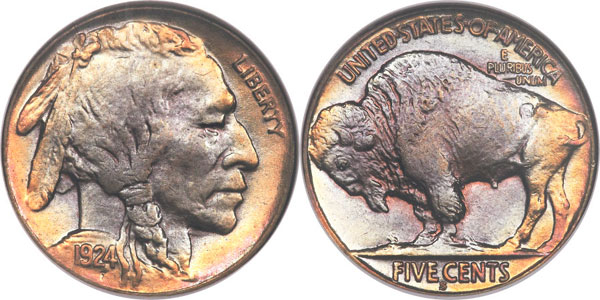 One of the reasons that this particular date is so rare in gem uncirculated condition is that most 1924-S uncirculated Buffalo Nickels are very weakly struck. Most likely done in an effort to prolong the usage of the dies, it is a common encountered problem with Buffalo Nickels struck at the San Francisco mint in the 1920s. Combine this with the low mintage and it is a no surprise that this nickel is an extremely rare issue that is seldom offered for sale at this level. 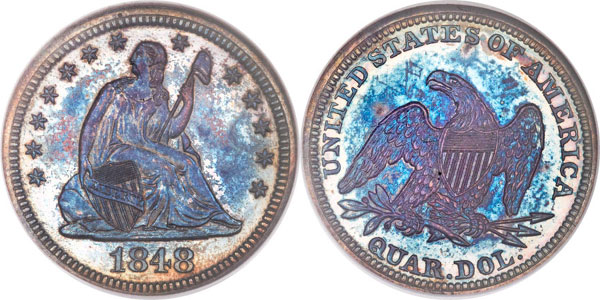 Prior to 1859 the United States Mint in Philadelphia did not strike proof coins for collectors, but instead struck them sparingly, either for important people or for the few collectors who requested them. As a result most proofs prior to this date are extremely rare. Lot 3102 is one such piece, an 1848 Proof Seated Quarter graded PR65 by NGC. Among the finest known in Proof format of this date, there are just six examples confirmed to exist in Proof format. Because of their rarity there are very few collectors of these early Proofs by date, but regardless of this they are still in much demand. Most of these coins were probably part of original sets of all coinage of a given year struck in Proof format, but after more than a century very few of such sets are still together, with most of such coins offered as individual coins. 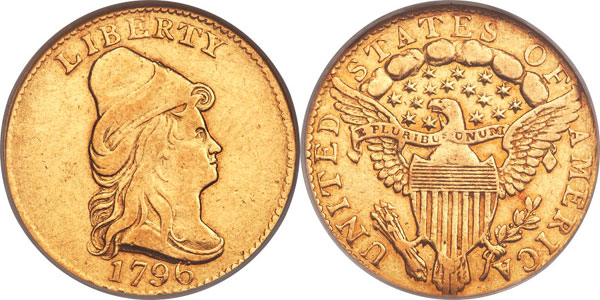 We go back to the earlier days of the Philadelphia Mint with Lot 3238, an NGC XF40 graded example of the first Quarter Eagle Struck, the 1796 No Stars. A one year type with a recorded mintage of just 963 pieces, this is one of the rarest and most difficult to find types of United States gold coins. Produced a year after the first eagles and half eagles were struck, the quarter eagle was America’s smallest gold coin until the introduction of the gold dollar in 1849. It was not struck in all years as demand for this denomination was limited (too big for everyday purchases, too small for banking purposes), making many dates that were struck very rare for today’s collector.

The first year of issue was divided over two distinct varieties: with and without obverse stars. The earliest examples produced, of which the coin offered by Heritage is an example, was struck without stars in the obverse field. This is unique for these early United States coins, and it is unknown why the mint chose to strike coins of this design. Whatever the reason was the design was short-lived anyways, as later in 1796 stars were added to the obverse design, creating this rare type with a very limited mintage.

The final coin we would like to discuss is Lot 3374, the 1908 With Motto $20 gold piece, struck in proof format with a Roman or “Satin” Finish. Extremely rare, perhaps unique, the coin is considered a prototype for this finish, which was used on all proof gold double eagles in 1909 and 1910. Regular proofs of this denomination in 1908 were struck with matte proof surfaces, which are noticeably different in hand compared to the roman finish coins. The matte proofs are grainy and dull, a format seen on many gold proofs of the 1910s. Even though they were unpopular at the type they continued to be struck until the production of regular produced proofs ceased after 1915, perhaps the result of the unpopular finish itself.

Of course, very few collectors can collect early 20th century gold coins in proof format by date, let alone by finish. Despite this the coin gives important insight into the production method of gold proofs at the Philadelphia Mint in the 1910s. Even though NGC has certified numerous coins with this finish it is unknown whether or not these are submissions of the same coin offered by Heritage. If this were the case it would mean that the coin is possibly unique.