Traditionally the first major coin show of the year is Florida United Numismatists (FUN) convention held in Florida during the first weeks of the year. This year Heritage Auctions is holding a number of different auctions in conjunction with the FUN show, as the collecting public commonly refers to it. In this article we will preview some of the most spectacular lots in two of those auctions. These are part of the Donald G. Partrick Collection of colonial coins while others are part of Platinum Night, traditionally the auction where the rarest items are being offered for sale. 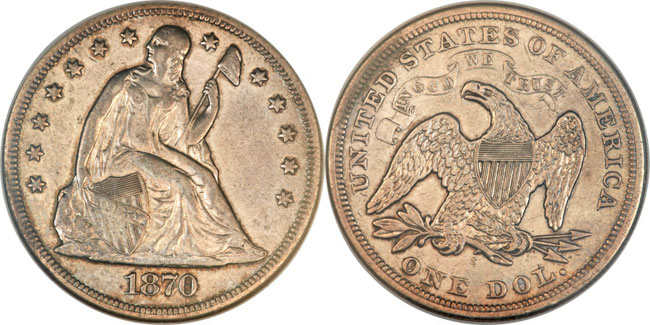 Platinum Night will be held on Wednesday night, January 7th. The sale consists of 512 lots, including many rarities, finest known coins and pieces seldom offered for sale. Since there are so many coins that might be featured in this article we will take a look at some of the rarest of the rare. The first of these is Lot 4173, an NGC XF-40 1870-S Liberty Seated Dollar, one of just nine examples known to exist. A prime silver dollar rarity, the exact circumstances of its creation are unknown, but it is generally assumed that a dozen pieces were produced, one or two of which were placed in the cornerstone of the new Mint building. All but one of the pieces known to exist are circulated, which would mean that they might have spent time as pocket pieces before their true value was realized. The coin offered by Heritage at Platinum Night falls quality-wise in the middle of the roster of known examples, and is commonly referred to as the “Queller Specimen”.

The true highlight of the auction, placed prominently on the cover of the catalog is Lot 4412, the 1907 Ultra-High-Relief Saint-Gaudens $20 Gold Piece, graded PR68 by both PCGS and NGC (as noted in the catalog; the coin is presently encapsulated by PCGS) that was originally struck for the Mint Cabinet but remained in the possession of Augusta Saint-Gaudens, the widow of Augustus Saint-Gaudens, who was given the coin by specific request of President Theodore Roosevelt. At some points the initials “ASG” were scratched on the edge, a practice that was actually quite common at the time. Augustus Saint-Gaudens loaned the coin to the American Numismatic Society, where it remained until the early 1950s, when the coin was removed from display by Homer Saint-Gaudens, son of the Saint-Gaudens. It was sold to a private collector by Homer sometime later, who sold it to the consignor of this auction in the early 1970s. The catalog contains an excellent multi-page description, including a roster of all known Ultra-High Relief 1907 $20 gold pieces. The pedigree of this piece should certainly raise interest, but it must be noted that this piece is not the finest known, as one piece graded PR69 by PCGS is known to exist as well. 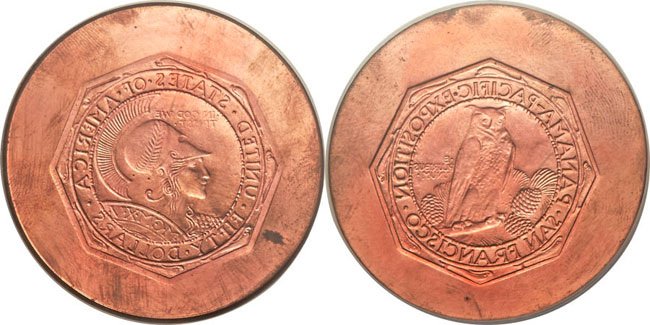 Of special interest are also lots 4505 to 4510, which are a small collection of die trails related to the early commemorative series. Such trail pieces are very rare for this part of American numismatics. An accumulation of any of these pieces is an opportunity to buy some very rare pattern coins, which are very seldom offered for sale. Lot 4508 is perhaps the highlight of this group, a unique copper trial piece of the hubs of the 1915 Octagonal Panama-Pacific $50 Commemorative, the largest and perhaps most famous of the all early commemoratives. In the minting process hubs are made prior to individual dies, and will show the design in the correct way, before a mirror image is transferred to individual dies from which the coins are struck. Thus, when trial pieces of hubs are struck, they will show a mirror image of the final design. This is also the case for this piece, which has been graded PF65RD by NGC.

The Partrick Collection is the first part of a specialized colonial collection that was assembled over a period of many years by a very dedicated and specialized collector. Most of the pieces have been recently certified by NGC, but the original envelopes in which many of the pieces were kept for decades are photographed in the online auction descriptions as well. These envelopes often contain valuable information, such as pedigrees, sources and prices paid. Without a doubt many of the purchases made will prove to be valuable investments with excellent returns.

The first part of the collection will be offered on Thursday, January 8, and the collection has received a dedicated catalog, which not only includes lot listings but also other sources of information. First up for sale is the most advanced collection of 1792 patterns ever offered for sale, twelve lots total, consisting of coins that served as predecessors for the United States coinage that would first be struck in 1793. Lot 5502 is the unique 1792 silver center cent struck without a silver center (thus a hole appears in the central part of the coin), a coin which was allegedly found in a piece of furniture in the Philadelphia area. Lot 5504 is the finest known 1792 Birch Cent Pattern, pedigreed to the Garrett Collection (where the consignor purchased it for $200,000 in 1981) and graded NGC MS65*RB. The coin is expected to bring several million dollars, and is one of approximately half a dozen examples known (for this and many other very rare coins pedigree rosters of most of the known examples are given in the catalog). Lot 5506 is the unique copper pattern 1792 half disme, and Lot 5511 and Lot 5512 are both the only known examples in private hands of the 1792 Quarter Dollar pattern struck in copper and white metal, respectively.

After this spectacular offering of 1792 patterns the catalog follows a more standard approach of offering the collection, starting with the undated New England Shillings (produced circa 1652) which are known as the first coins struck in what would later become the United States. While any offering of this type is a rare occurrence, the Partrick Collection has a total of six examples, offered as lots 5513 to 5518. These are followed by an extensive collection of Massachusetts Silver coins, of the Willow, Oak and Pine Tree types that were produced in Boston throughout the second half of the 17th century but are all backdated to 1652. We can literally highlight dozens of coins that are the highest numerical grade of their respective varieties, but that would be beyond the scope of this article. When flipping through these pages of the catalog we see familiar names of famous collectors of these iconic coins, such as Hawn, Norweb, Eliasberg, Noe and Boyd.

Unique coins are sometimes encountered in the colonial series, and the Partrick collection features a number of such pieces, all of which are of course important offerings. Many of these unique coins are a separate entry in the Red Book, and as such of major importance to specialized colonial coin collectors. After the unique aforementioned silver center cent without a silver center and the copper half disme two unique coins are offered from the Lord Baltimore series. The first is Lot 5621, the unique small bust Fourpence, and the second is the following Lot 5622, the unique Hodder 1-B variety of the Sixpence denomination. The Lord Baltimore coinage was struck at London’s Tower Mint circa 1659 (although the coins themselves are undated), and exported to the colony of Maryland, where they circulated for at least a decade and maybe even longer. 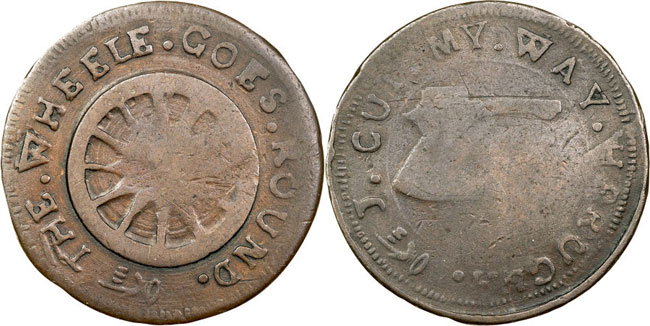 The next unique coin offered is Lot 5637, the unique “The Wheele Goes Round” Higley Copper, struck circa 1739, and discovered in 1913. The Higley series of coppers is a curious part of American Colonial series, which have been linked to various individuals named Higley from Connecticut, including Samuel Higley, who was a Doctor and owned a copper mine in the area. While their exact link to the coinage is unconfirmed the coins are still referred to as Higley Coppers. Most are very rare and are often identified by a deer on the obverse, although the piece offered as lot 5637 shows a wheel with spokes, the only such coin in the series. The reverse has an axe and the text “I CUT MY WAY THROUGH”. Besides this unique coin the Partrick Collection features a total of five different Higley Coppers, a very rarely encountered opportunity for collectors to acquire an example of this iconic colonial coinage. 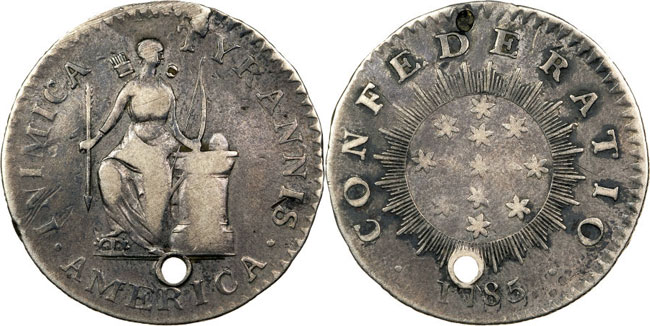 Lot 5639 is the unique 1785 Inimica Tyrannis America struck on a silver planchet with a reeded edge. Little is known about this issue, which is usually struck in copper, but it was referenced in a 1785 publication of the Continental Congress, and may have a link to Thomas Jefferson. Even pieces in copper are quite rare, and this unique silver piece, despite having been holed, should see spirited bidding. 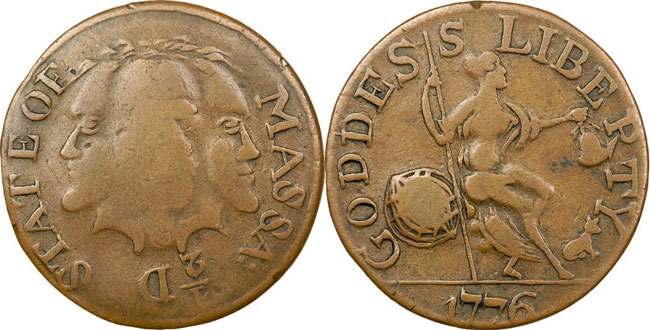 The last lot of this collection that we would like to mention is Lot 5672, the unique 1776-dated Massachusetts “Janus” Copper or Halfpenny. Plated in the 1875 Crosby Reference, listed as an individual type in the Red Book, and a piece of which basically nothing factual is known, the piece has not been offered for sale since the Garrett collection was sold in 1979. Prior to that it only changed hands a few times, and at various points it was described as a work of Paul Revere, a 19th century fantasy piece, or something different altogether. No matter what it is this coin is definitely an issue, which should see much interest from advanced collectors.