From September 17 to September 19, the third and final Long Beach Expo of the year will be held in Long Beach, California. As usual, Heritage Auctions will hold a Signature Auction during the week, with internet-only auctions continuing the following week. In this preview, we will take a look at some of the most interesting lots to be offered at the auction. Further info, as well as detailed images and descriptions of all lots, can be found on the Heritage Web site.

The first lot we will look at is one of the finest known examples of a classic 20th century key date. Lot 3716 is a PCGS MS-67RD graded example of the 1909-S VDB Lincoln Wheat cent. A coin that barely needs an introduction, its mintage of just 484,000 coins created a well-known rarity that has been heralded as the rarest Lincoln cent and a prized possession in all grades. Even though a reasonable quantity of Uncirculated coins were saved over the years, few have survived in gem condition with original mint red color. Combine that with high demand and we see why such a premium gem is guaranteed to attract a lot of attention whenever it comes up for auction—which is not all that often, as only twelve coins have reached this level at PCGS in almost thirty years of grading. 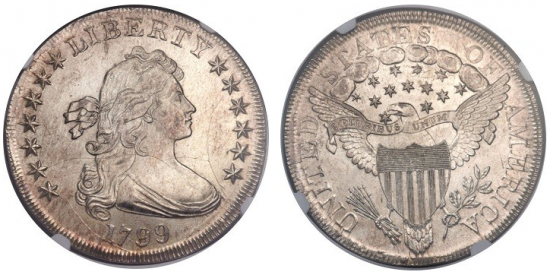 With the Pogue collection presently being sold, there are plenty of fresh, original, and high-grade offerings coming to the market. There are others as well, however, and we should not overlook them. An example is lot 4015 in the Heritage Auction, a 1799 Bust dollar graded MS-65 by NGC. Of course, any 18th century coin in gem Uncirculated condition is a rarity, but it is hard to imagine many silver dollars surviving in such lofty grade, thanks to their impressive size and relatively high face value at the time of issue. The coin sold by Heritage is particularly interesting, as it was struck twice from terminal dies, with extensive die cracks noted on both sides, and part of the first strike visible. It only adds to the allure of this particular piece, which ranks among the finest early dollars in existence. 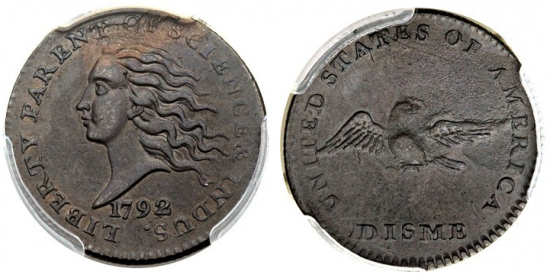 1792 patterns are extremely rare and represent the humble beginnings of America’s coinage, struck the year before regular production commenced at the Philadelphia Mint. Of these, the 1792 copper disme is one of the more available coins of this rare group, but with just 20 examples known to exist remains a prized numismatic item. Lot 3798 in the Heritage auction is a nice mid-level example for the advanced collector, graded XF-40 by PCGS. The coin has an extensive pedigree of over a 100 years, having been plated in the 1914 ANS Exhibition catalog, and it was most recently sold by Heritage as part of the Partrick Collection in January of this year. It realized $211,000 at the time, and it will be interesting to see if that price can be matched or succeeded when it comes up for sale in Long Beach.

A total of five Indian Head cents are known to exist that were struck on quarter eagle gold planchets. These mint errors are among the rarest types: Coins struck on planchets of the wrong denomination. Add to that the fact that they are struck on gold planchets, which were always carefully handled and accounted for, and we can see why these errors are such rarities. Lot 3708 is the only known example dated 1905 (the other four are dated 1900 and 1906), and has been graded MS-64 by PCGS. The coin was unknown to the numismatic community until its first appearance at Heritage’s January 2010 auction, where it realized $253,000. It sold earlier this year at Heritage’s April Central States auction for $123,375, and will now be sold for a third time in just over five years. 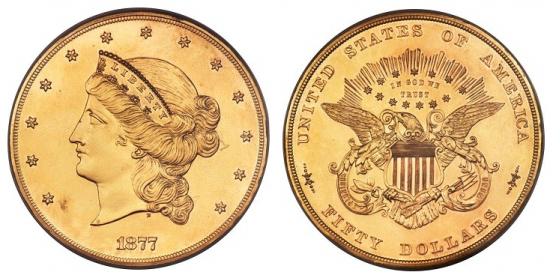 The final lot we’d like to cover is a so-called “half union,” a denomination that few people will be familiar with. It is a $50 gold coin (a full union would have been a $100 gold coin), which never made it past the pattern stage in 1877. Two varieties are known, identified by either a small or large head of Liberty on the obverse. Only a single gold striking is known of each variety; both are in the Smithsonian Institution, leaving collectors with a small number of copper strikings, some of which were gold-plated. Lot 4304 is such a copper gilt example, with a small head obverse, identified as Judd-1549 and graded PR-63+ by PCGS. Approximately nine copper examples are known, of which six appear to have been gold-plated after striking. Although the half union and union denominations had been suggested shortly after the California Gold Rush, there was no apparent reason to introduce such large gold coins in 1877, giving the suggestion that this was more a private endeavor of Mint Director Linderman, something that wasn’t unusual in the 1870s.

As might be apparent from this preview, there are several unusual numismatic items coming up for sale that provide rare opportunities for the advanced collector. The auction is the first major sale after the huge ANA show and auction, and will provide a good indication of what to expect as we head into the fall and winter periods, which always sees an increase in numismatic interest compared to the summer months.