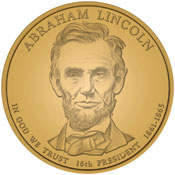 Circulation release dates have been established for the upcoming 2010 Presidential Dollars. The four coins to be issued next year will feature the former Presidents Millard Fillmore, Franklin Pierce, James Buchanan, and Abraham Lincoln.

The US Mint recently released line art images for the obverse designs of each coin, which feature a portrait of each President with inscriptions indicating the order of Presidency and years served. The reverse of each coin will feature an image of the Statue of Liberty that has been used for each coin in the series so far.

The release dates were made available by the Federal Reserve Banks, which work with the United States Mint to distribute the coins to depository institutions. The posted public release dates for each coin are shown below.

Depository institutions will be able to order unmixed quantities of each Presidential Dollar during a special order period, which includes three weeks before and two weeks after the public release date. The Federal Reserve distributes the coins in rolls of $25, packaged in boxes of $1,000.

The United States Mint generally offers each release of the Presidential Dollar series directly to collectors in smaller quantities. The US Mint’s recently released 2010 product schedule includes 25-coin rolls of each release from the Philadelphia or Denver Mint. During 2009 similar rolls had been sold for $35.95 each.