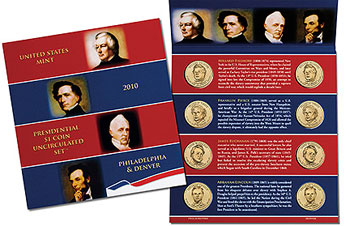 Each of the 2010 Presidential Dollars features a portrait of the President being honored on the obverse and a depiction of the Statue of Liberty on the reverse, intended to symbolize the concept of Liberty. Inscriptions on the obverse and reverse indicate the President’s name, order of the Presidency, years of the term, face value, “United States of America”, and the motto “In God We Trust.” Letting applied to the edge of each coin indicates the date, mint mark, and motto “E Pluribus Unum”.

The Presidential Dollar coin series began in 2007 and has featured each of the former Presidents of the United States in the order served, with four different coins issued per year. Each coin in the series has been released through the channels of circulation and offered by the United States Mint in a variety of collectible or numismatic products.

Earlier in the year, the US Mint released the 2010 Presidential Dollar Proof Set, priced at $15.95, which still remains available for sale. On February 18, 2010, the Millard Fillmore Dollar was released into circulation and offered in numismatic bags and rolls. The next circulation release of the series fearing Franklin Pierce is scheduled to take place on May 20, 2010.