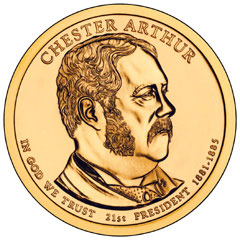 In December 2011, the Treasury Department announced the suspension of production of Presidential $1 Coins for circulation. Effective from the date of the announcement, the coins would only be produced in the quantities necessary to meet demand from collectors. Accordingly, mintage levels for the 2012 Presidential Dollar were significantly lower than previous years of the series.

The suspension was imposed in response to the unintended build up of more than 1.4 billion surplus $1 coins stored at Federal Reserve Banks. For the initial years of the series from 2007 to 2010, Reserve Banks had made each release available to financial institutions in unmixed quantities during an introductory period. The financial institutions would order quantities that they deemed necessary to meet the needs of their customers, however when some of the coins were redeposited or unused, they were eventually returned to the Reserve Banks. With four different designs issued per year, each release added to the surplus $1 coins in storage.

The highest mintage for the series occurred for the 2007 George Washington Presidential Dollar, with more than 340 million coins produced at the Philadelphia and Denver Mint facilities. This was followed by mintages of about 224 million for John Adams, 204 million for Thomas Jefferson, and 172 million for James Madison, for a total of 940 million Presidential Dollars produced in 2007. For the following years of the series, mintage levels gradually fell, until stabilizing around 75 million per design for 2010 and 2011.

For 2012, the average mintage per design fell to around 11 million. The highest overall mintage occurred for the Grover Cleveland Second Term coin at 14.6 million. The lowest overall mintage occurred for the Grover Cleveland First Term coin at 9.52 million. Cleveland makes an appearance on two separate coins within the series since he served as President in two non-consecutive terms. The total mintage across all four designs issued for the year was 44,040,001.

The coins of the series are no longer distributed to the channels of circulation, but only available for purchase from the United States Mint within numismatic products which are priced at a premium to face value. Circulating quality versions of the coins have been offered in 25-coin rolls priced at $32.95, 100-coin bags priced at $111.95, 250-coin boxes priced at $275.95, and 500-coin boxes priced at $550.95. The US Mint has also offered four coin sets containing one example of each design priced at $9.95.

For 2013, the Presidential Dollar Program will continue in the current limited fashion with the new releases featuring William McKinley, Theodore Roosevelt, William Howard Taft, and Woodrow Wilson only available within US Mint numismatic products. The Mint has tentatively scheduled to begin sales of the William McKinley coins in bags, rolls, and boxes on February 19, 2013.