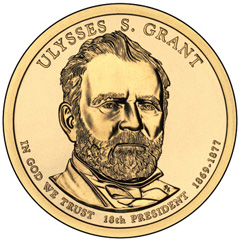 The Presidential $1 Coin Program has been the focus of some mainstream media attention this year, following reports of a hoard of more than $1 billion worth of the coins in Federal Reserve vaults. Six different bills were subsequently introduced in Congress which sought to abolish, limit, or suspend the production of additional $1 coins. A single bill was introduced which sought to phase out the $1 bill in favor of $1 coins. So far, none of the bills has been voted on or passed in the House of Representatives or Senate.

Under the existing legislation, the US Mint is required to produce four different Presidential Dollars per year, honoring the former Presidents in the order served. Federal Reserve Banks are required to make each new design available to depository institutions in unmixed quantities during a special ordering period. This particular requirement has been cited as one of the primary causes of the build up of surplus $1 coins, since the Reserve Banks are compelled to continue ordering quantities of each new design despite stockpiles of existing coins.

Across the four different 2011 Presidential Dollar designs, the US Mint produced a total of 297.36 million coins for circulation at the Philadelphia and Denver Mints. The production level for each design ranged from a low of 72.66 million for the Andrew Johnson coins to a high of 76.02 million for the Ulysses S. Grant design.

Since the start of the program in 2007, the United States Mint has now struck more than 2.3 billion Presidential Dollars. The table below shows the annual circulating coin production totals including coins struck at the Philadelphia and Denver Mint facilities.