The United States Mint has released their latest numismatic product offering including the 2012 Presidential Dollars. These products have received more attention this year, following the suspension of production of the series for circulation. 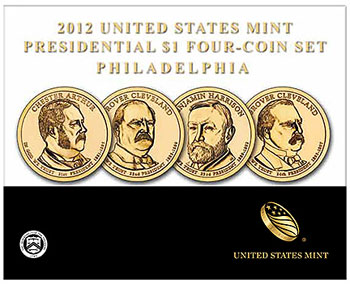 The 2012 Presidential $1 Four Coin Sets include one example of each of the four designs for this year featuring Chester Arthur, Grover Cleveland (first term), Benjamin Harrison, and Grover Cleveland (second term). Separate sets are available containing coins from either the Philadelphia or Denver Mint, with each set priced at $9.95 each. Orders may be placed online at http://usmint.gov/

The packaging for this product allows the coins to be easily removed for placement into albums or other displays.

This product may appeal to collectors only seeking to acquire one example of each coin. Other product options including circulating quality versions of the coins are packaged in higher quantities. For the Chester Arthur and Grover Cleveland (first term) Dollars, the US Mint currently offers 25-coin rolls priced at $32.95, 100-coin bags priced at $111.95, 250-coin boxes priced at $275.95, and 500-coin boxes priced at $550.95.

Similar products will be released for the Benjamin Harrison and Grover Cleveland (second term) Dollars later this year.