Ulysses S. Grant was the 18th President of the United States of America. He was the commanding officer for the Union forces during the latter half of the American Civil War, but also served in the Mexican-American War under former President Zachary Taylor. His role in the political battle between President Johnson and the Radical Republicans in Congress was key to his nomination for President in 1868. His two terms in office were accented by the last half of Reconstruction, the handling the conflicts between expanding settlers in the Western areas and the Native Americans in those same areas, and signing and enforcing civil rights laws. 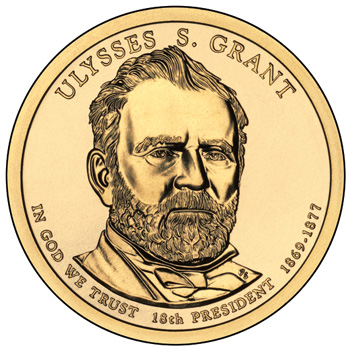 The coin bearing President Grant’s image is the eighteen in the series of Presidential Dollars, and the second to be issued in 2011. The obverse depicts Grant, his years in office (1869-1877), order of the Presidency, and the motto “In God We Trust”. The reverse shows the Statue of Liberty in the same design as been depicted on all Presidential Dollar coins. The edge has the motto “E PLURIBUS UNUM”, the year of issuance, and the mint mark.

The Ulysses S. Grant Presidential Dollar will be released into circulation on May 19, 2011. The coins will also be available from the U.S. Mint in the following products: