Editor’s Note: Coingrader Capsule occasionally runs series, such as “Crossover-, Under- and Out,” about submitting coins graded by one company to another company, either to enjoy a premium or to qualify the coin for set registries. Earlier we ran two posts about Certified Acceptance Corporation, a numismatic firm whose specialty is identifying high quality coins holdered by NGC and PCGS. This is the third installment, sharing the results. A final post will assess the CAC experience and note a surprising occurrence during the evaluation process.

Read part one, part two, and part four of this article series.

Last week I sent in my first CAC submission with these high-end coins, fetched from my bank box:

In the second installment of our CAC series, I predicted which of the above would earn a CAC sticker:

1. STICKER: 1878 cent, PCGS, NGC PF65 Red Cameo. This is a stunning coin. Each time I go to my local bank to behold it, I am startled by its beauty. When my spouse Diane first saw it, she thought it was a gold 2 1/2 coin. Strike is needle sharp.
2. STICKER. 1955 cent double-die obverse, PCGS AU58. I always felt this coin was undergraded by PCGS and should have been low mint state. PCGS may believe in its plus sign, but it doesn’t believe much in MS60.
3. NO STICKER. 1913-D nickel, Type II, PCGS MS64. This is a difficult call. I think the strike may be too weak. It’s a low MS64 in my opinion; but CAC has more experience with date, type and denomination.
4. POSSIBLE STICKER. 1923-S nickel, PCGS MS63. This date usually comes with a weak strike, but the mint state is already low. I’d say it has a 50-50 chance.
5. NO STICKER. 1936-D nickel, PCGS Green Holder MS67. I know it’s a green holder. I know MS67 is an exceptionally high grade for a green label. But just before I sent it in, I noticed a small spot on the reverse. The camera could not pick it up, but I think CAC will.
6. POSSIBLE STICKER. 1945-S dime, micro S, NGG MS67. The strike is weak on the reverse, but the eye appeal is exceptional. Another 50-50 chance.
7. STICKER. 1928 Peace Dollar, PCGS MS62. OK. This was in an Old Green Holder. The coin is virtually mark free. Yes, the luster is lacking. Last year the flawless surface prompted me to send it to PCGS for an upgrade, only to have PCGS slap on a blue holder at the same grade. Maybe CAC will see it my way.

I just received these results: 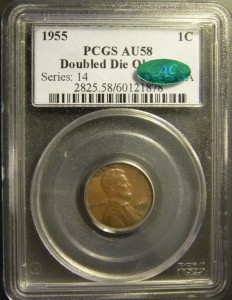 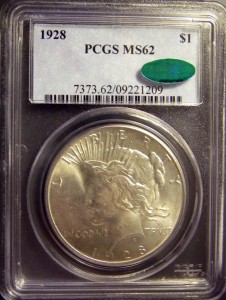 In the end, two out of three coins I felt exceeded the grade on the holder were stickered. In retrospect, I agree with the No Sticker on all of the other coins. The buffalo nickels and micro S dime were just too weakly struck, and the proof Indian Head cent–though beautiful–had a different tone of red on the obverse left side than on the obverse right side (indicating the coin had been toning before being slabbed).

My only regret had nothing to do with CAC. Last year I sent the 1928 Peace dollar in an old green holder to PCGS for re-evaluation, in the hope that I would get a plus. (See my post about “Them Old Green Holders.”) That green CAC sticker would have looked lovely on that green-label backdrop.

A few parting shots before next week’s installment about the entire CAC experience.

In the final CAC installment, I will summarize my CAC experience and disclose how that company indirectly played a role in my identifying a counterfeit PCGS holder and coin in a Proxibid auction.