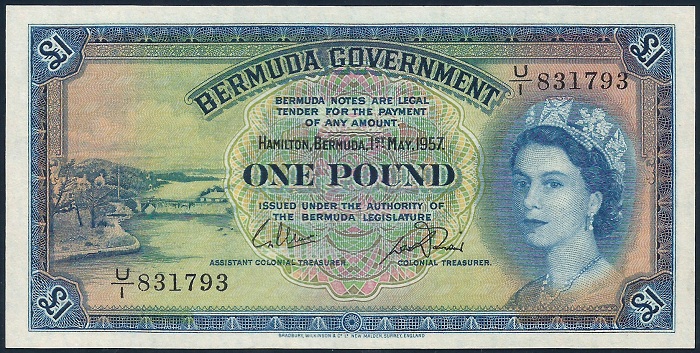 Bermuda is an island in the North Atlantic Ocean that was named after the Spanish Explorer Juan de Bermúdez, who first visited the island in 1503. A British Overseas Territory, the island is popular with North American and European tourists for its climate, which is mostly pleasant year-round, despite the relatively northern location. While not technically part of the Caribbean, it is a member of CARICOM, an organization of 15 Caribbean countries. As an overseas territory of Great Britain, it has long had the authority to issue paper money; it first did so in 1914, and continues to do so this day. In this article we will take a look at the pre-decimal issues of this country, which were issued between 1914 and 1970.

The very first bank note of Bermuda (Pick-1) is a 1-pound note, issued in 1914 and printed by the American Banknote Company, Ottawa (all other notes discussed in this article were printed by British printers, mostly Waterlow & Sons and Bradbury & Wilkinson & Co.). Predominantly green, the note features the coat of arms on the left hand side and a relatively simple design on the back. Very scarce in all grades, most survivors are in lower grades, although higher-graded specimens and Proofs also come on the market occasionally. 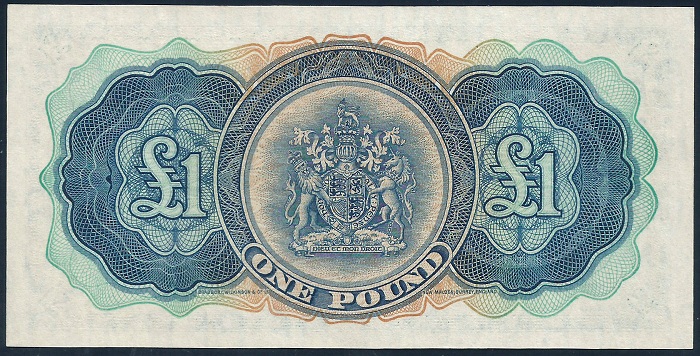 This note was tied to the British pound at par, and English currency continued to circulate on the island during this period. In the 1920s a new series of bank notes was introduced carrying the portrait of the then-current British monarch, George V. The 10/- shillings and 1-pound notes (Pick-4 and Pick-5) were introduced first and carried vignettes of Bermuda on the face. A 2-shilling, 6-pence note was prepared but never issued (Pick-2), while the 5/- shilling note (Pick-3) was initially dated 1920 but in fact not introduced to the island until 1935. All these early notes are available in lower grades (although not necessarily cheap), but become very rare in original VF/XF.

George VI became the British Monarch after his brother abdicated in late 1936 (no notes bearing the portrait of Edward VII were ever issued), and new bank notes featuring his portrait were introduced in Bermuda the following year. Two issues, a 1/- shilling (Pick-6) and 2-shilling, 6-pence note (Pick-7) were prepared for an anticipated shortage of coinage but never issued. Most of these were destroyed, but it is believed that 11 sets were kept, all of which are obviously very rare and highly prized. 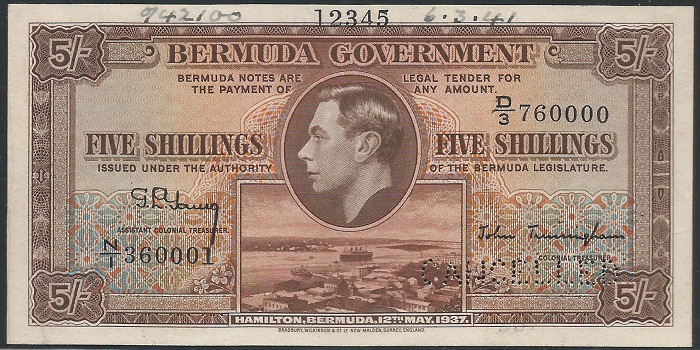 All these notes feature the coat of arms of Bermuda on the back. The 1947 issues are generally scarcer than the 1937 issues, and all notes are rare in higher grades — although they are occasionally found even in Uncirculated condition, with perhaps the 1937 5-shillings most available in that grade. The green 10/- shilling is a major rarity and one of the most famous of all of Bermuda bank notes.

The highest denomination issued during this time was the 5-pound note, which was first introduced in 1943 but dated 1941. It featured a forward-facing portrait of George VI on the right and another view of Hamilton Harbor on the left. The denomination was initially brown (Pick-12), but later changed to orange (dated 1941, Pick-13 and dated 1947, Pick-17) in order to prevent confusion with the brown 5-shilling note.

Thanks to the high denomination of these notes and the fact that they were issued during a turbulent time in world history, all three types of the 5-pound note are rare in all grades and are major rarities in the higher grades, such as XF. Personally, I don’t believe that this type (as well as some of the other George VI bank notes) exists in Uncirculated condition, and even the best Commonwealth collections have included these types in circulated condition only.

George VI passed away on February 6, 1952, and his oldest daughter, Elizabeth, became Queen as Elizabeth II. As the current British monarch, her bank notes remains extremely popular. The first issues of Bermuda with her portrait were virtually identical to the bank notes of George VI, with her portrait replacing that of her father (and facing the other way, a tradition also seen on British coinage). All other design elements remained identical until 1966, except for the signatures of the colonial treasurer. 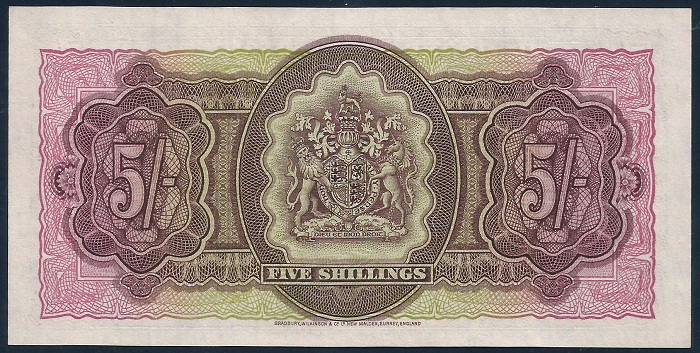 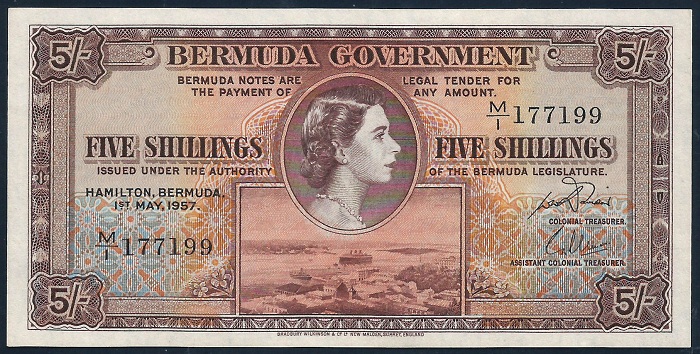 The pre-decimal bank notes of Bermuda with the portrait of Queen Elizabeth II are very collectible, but most issues remain affordable in circulated grades, even though they are now at least half a century old. The two higher denominations will approach four figures in nicer circulated grades (and the 10-pound will be a challenge at that level), but the lower denominations are a lot more affordable.

All issues of Queen Elizabeth II can be found in Uncirculated condition, although some issues are surprisingly difficult to find in Uncirculated grades (such as the 10/- shillings dated 1966). The 1952 issue of the 5-pound denomination is more difficult to find than the later dates, but those remain very popular with collectors seeking a single example of that very popular type.

In 1970 Bermuda switched to a decimal currency system, with the Bermuda dollar replacing the pound. New issues would be released as a result, and all notes denominated in pounds were withdrawn from circulation to be converted into bank notes of the new issue at a rate of 8 shillings, 4 pence to a dollar. The decimal series of bank notes of Bermuda features many different varieties and continues to be issued to this day; our next installment will take a closer look at some of these notes.

Images provided by the author.