Together with small cents, Morgan Dollars are perhaps one of the most popular types of U.S. coins to collect. Many Americans have seen or own one of these heavy pieces of silver, and they continue to bring back memories of the old days when they were available at the banks at face value. Even if you were not around at the time, as a coin collector you surely have heard some of these stories and were perhaps mesmerized by what was possible just a relatively short time ago. 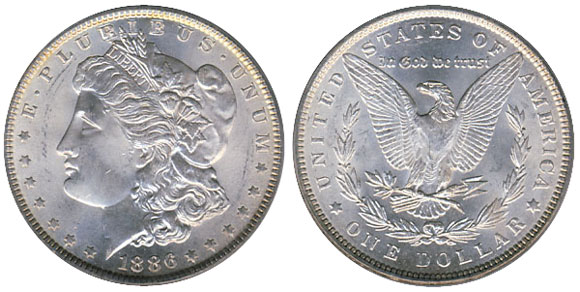 Beyond the nostalgic appeal, the Morgan Dollar series includes many common dates which are relatively inexpensive to acquire even in uncirculated condition. This makes the acquisition of one or more individual examples well within reach for the average collector. The pursuit of a complete set, however, is a much different story. A basic set requires a total of 97 coins, struck at five different mints, over a total of 43 years (including 17 years when no silver dollars were struck), with multiple key and semi-key date coins included along the way. While many collectors will choose to pursue such a set, there are other ways to collector Morgan Silver Dollars which are more approachable and less expensive.

In this article, I’d like to provide both beginning and advanced collectors with several possibilities for collecting the series. Some might be well-known, while others are perhaps unfamiliar. Feel free to add a comment how you like to collect Morgan Dollars, or if you have any other ways that make this historical series so popular to collect.

Like many coin series, the Morgan Dollars were struck at multiple mints. This means that a complete set would include multiples of the same date with a different mintmark. Unfortunately for the collector on a limited budget many of the date/mintmark combinations can be rarities which are quite expensive. One way to solve this “problem” is to first collect one of each date and disregard the mintmarks altogether. By doing so, you have the opportunity to acquire one of the more common coin of each year, but still build a feasible and very interesting collection. Most dates have at least one relatively inexpensive coin available, with the 1895 being perhaps the most difficult, as all mints had a relatively low output of silver dollars that year.

This type of collection can also be used as a starting point for a larger set. At a later time, you might decide to start acquiring more mint marked coins and build towards a complete collection. 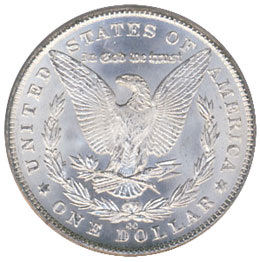 Collecting by type is a popular way to collect American coins, and most type collectors will include a single Morgan silver dollar in their collection. When studied closely, however, one will be able to discern a number of different design changes during the course of the series.

First of all, the original 1878 design had an eagle on the reverse with eight tail feathers. This was replaced in the same year with a reverse design that had an eagle with only seven tail feathers. In the process some eight tail feather coins were altered in order to reflect the change, creating a 7/8 tail feather variety. The seven tail feather variety remained the design of choice, but can further be divided in the 1878 or 1879 variety, depending on the shape of one of the arrows (the top one, with its feather either slanted or straight) and by the appearance of the eagle’s breast (flat or rounded). 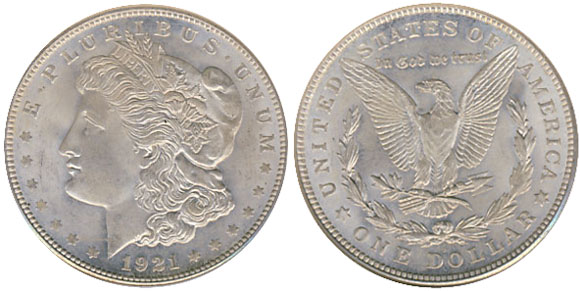 Finally, the 1921 issues have a distinctively different appearance and can be considered to be a separate type as well. As such, a “complete” type set of Morgan Dollars can include anywhere from one to five different coins.

This is a challenging set which is not recommended for the beginning collector, as it is perhaps one step below a complete Morgan dollar set. In this collection one chooses to only collect coins from one mint, such as the San Francisco or Carson City set. Since every Mint has at least one challenging coin, none of these set are easy or cheap to assemble. Yet, they can be rewarding, as especially a complete set of Carson City Morgan dollars is easily recognized and very historical.

As I have mentioned before there is no “correct” way to collect coins and this certainly is appropriate for the Morgan Dollar. Besides some of the sets mentioned above, one can also decide to collect by era, or make a combination of any of the ideas listed above. Collecting Morgan dollars can be a true lifetime endeavor which can be both fun and rewarding.