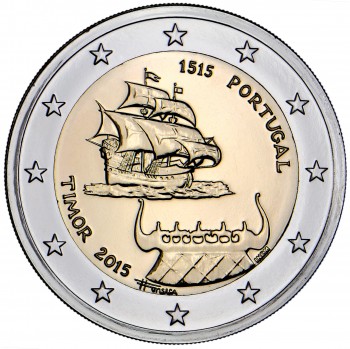 The Imprensa Nacional Casa da Moeda (INCM), or Portuguese Mint, has issued a new two Euro coin marking the 500th anniversary of first contact with its former colony of Timor. An island forming part of Maritime Southeast Asia, Timor is located between the Savu and Timor Seas near the coast of Northeast Australia.

First contact with Portuguese explorers was recorded in 1515, when they landed near modern Pante Macassar. Portuguese merchants immediately began to export sandalwood from the island until the tree nearly became extinct. In 1556, a group of Dominican friars established the village of Lifau. Later, in 1613, Dutch explorers who were active in the Cathay region gained control of the Western part of the island. Over the following three centuries, the Dutch would come to dominate the Indonesian archipelago, also known as the Dutch East Indies, with the exception of the eastern half of Timor, known as Portuguese Timor. Over time, the Portuguese introduced maize as a food crop and coffee as an export crop. They also introduced Roman Catholicism, the Latin writing system, the printing press, and formal schooling. The Timorese systems of tax and labor practices were preserved, through which taxes were paid with labor and a portion of the coffee and sandalwood crop. With the establishment of a formal possession in 1702, Lisbon sent its first governor to Lifau, which became capital of all Portuguese dependencies on Lesser Sunda Islands. The colony’s capital was moved to Dili in 1769 while the Dutch colonized the west of the island and the surrounding archipelago, now known as Indonesia. The island’s border between Portuguese Timor and the Dutch East Indies was formally decided in 1859 with the Treaty of Lisbon. In 1913, the Portuguese and Dutch governments formally and permanently agreed to split the island between them. The definitive border was drawn by the Permanent Court of Arbitration in 1916, and it is this agreement which remains as the international boundary between the modern state of Timor Leste and Indonesia.

Unfortunately for the Portuguese and the inhabitants of East Timor, the island remained little more than a neglected trading post until the late nineteenth century. Investment in infrastructure, health, and education was minimal. Sandalwood remained the main export crop but coffee exports were becoming significant. At the beginning of the twentieth century, a faltering home economy prompted the Portuguese to extract greater wealth from its colonies, resulting in increased resistance to Portuguese rule in East Timor. Between the years of the first and second world wars, there was significant investment from Japan. This investment was of concern to the British, Dutch, and Australian governments. Although Portugal was neutral during World War II, in December of 1941 Portuguese Timor was occupied by a small British, Australian, and Dutch force to prevent a Japanese invasion. Despite these efforts, the Japanese did invade in February 1942; under Japanese occupation the Dutch and Portuguese borders were overlooked and the whole of Timor island became a Japanese army administration zone. Following the conclusion of World War II, Portugal promptly returned to reclaim their colony while West Timor became part of Indonesia, securing its independence from the Netherlands in 1949.

Following a government coup in 1974 that ended the António de Oliveira Salazar era, the new government of Portugal favored a gradual decolonization process for Portuguese territories in Asia and Africa. With the support of the government in Lisbon, East Timor declared independence on November 28, 1975, ending its formal association with Portugal after 460 years. Indonesia invaded the territory just nine days later, eventually declaring it the country’s twenty-seventh province of Timor-Timur in 1976. The United Nations did not recognize the annexation, however. Indonesian occupation ended in 1999, with East Timor becoming formally independent in 2002 after a United Nations administered transition period. 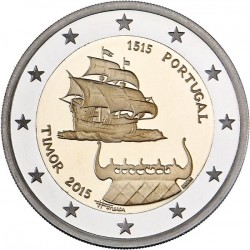 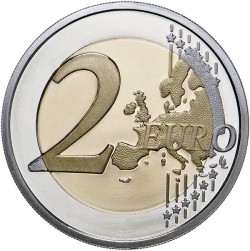 The coin, which depicts a Portuguese caravel, or tall sailing ship, and a local Timorese ethnographic element, is designed by artist Fernado Fonseca. The commemorative text “PORTUGAL 1515” and “TIMOR 2015” is placed on either side of the primary design.

The coin is available in both BU and proof in special packaging. For more information on this and other items from the Imprensa Casa da Moeda, please visit their website. Information is offered in English & Portuguese, with international orders dispatched where applicable.