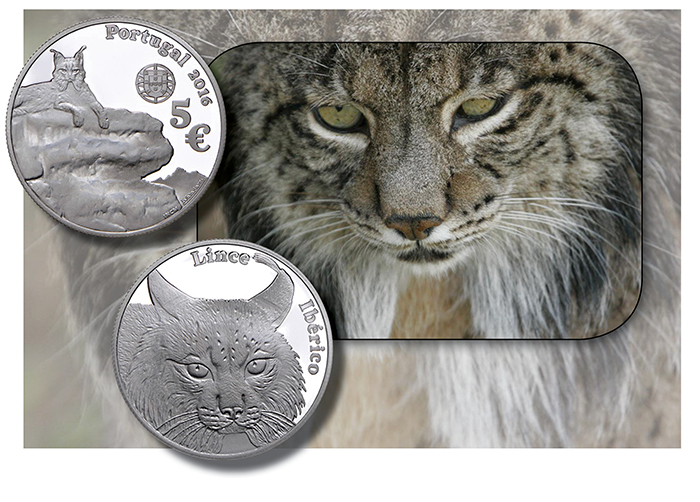 On October 12 the Imprensa Nacional Casa da Moeda (INCM) launched a new coin series that will highlight various endangered wildlife species in the region and the conservation efforts to preserve them. (Scroll down for more about this remarkable animal.)

The coin is designed by Luis Valadares. On the obverse, a frontal image of the face of an Iberian Lynx encompasses much of the coin’s surface. Around the upper-right field is the text “Lince / Iberico” (divided by the lynx’s ear).

The reverse depicts a lynx lounging on a rock surface representative of their natural habitat. The Portuguese coat of arms is positioned to the right of the principle design, with the denomination, 5€, to the lower right of the crest. Around the upper-right field is the text “Portugal 2016.”

The sterling silver Proof is encapsulated and presented in a custom case with color printed slip-box. For more information on this and other coins issued by the Imprensa Nacional Casa da Moeda, please visit their website, which can be viewed in both Portuguese and English. International sales dispatched where applicable. 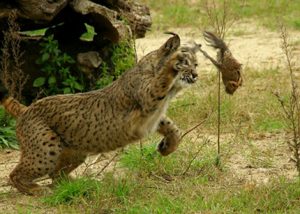 The Beautiful and Endangered Iberian Lynx

This series begins with the world’s most endangered feline species. Once found in Spain, Portugal, and southern France, the Iberian Lynx has not been detected in Portugal since the 1990s despite extensive surveys. The small existing population is found only in two small areas of southwest Spain, west of the Pyrenees mountains.

The Iberian Lynx (Lynx pardinus) have the distinct look of the broader lynx species, with a small head, flared facial ruff, long legs, dark ear tufts, and a very short, dark-tipped tail. Typically, they have a coat of yellowish to reddish-brown color, patterned with many dark brown or black spots of varying size. There are three distinct individual coat patterns, and their belly fur is lightly colored. The adults’ facial ruff is more distinct than that of other adult lynx species.

The Iberian Lynx is about half the size of the Eurasian Lynx, although they are closely related. Males average about 27% larger than females, with a typical body length of 27 to 32 inches (68–82 cm) and a weight of 15 to 22 pounds (7–10 kg). In size, the Iberian Lynx is closer to the Canadian Lynx (Lynx canadensis) and the Bobcat (Lynx rufus).

Their ranges or habitats were once located at the Spanish-French border along the Pyrenees Mountains. More recently, the range of the Iberian Lynx had significantly decreased, and now consists of a series of small islands of suitable natural habitat, including national parks and reserves. Presently, conservationists fear that it may soon become the first cat species to become extinct in at least 2,000 years. Conservative efforts have yielded real results, however, and from a shrinking population of less than 100 cats in 2002, their small population has increased to more than 300 cats observed to be thriving in the forests of the Iberian Peninsula.