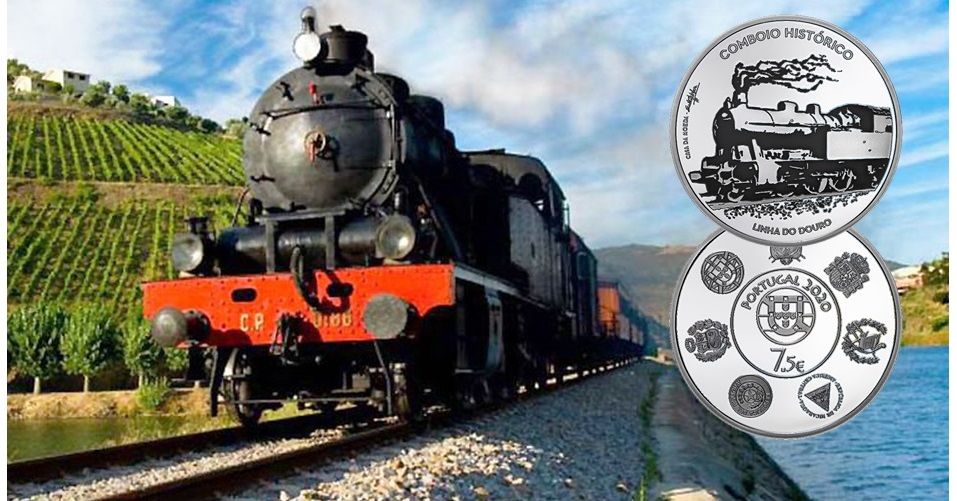 The Imprensa Nacional-Casa da Moeda (INCM) has released new silver Proof coins which are part of the annual Ibero-American series, now in its 12th year. The multi-national coin series includes the two countries of the Iberian Peninsula, Portugal and Spain, as well as a variety of Latin American countries with a common chosen theme and reverse design. This year the theme is “Historical Trains,” and, as such, the Portuguese coins highlight the Linha do Douro.

Connecting the city of Porto with the Pocinho, high up in the Alto Douro, the later sections of the route are considered one of the most picturesque railway lines in Europe. The Douro Valley includes some of the most beautiful natural scenery of Northern Portugal, which is formed of terraced vineyards and steep valleys. Closely situated along the winding river, this well-known train line best sees much of the beautiful countryside. What is even more special about this particular line is that travelling on the Linha do Douro is like travelling back in time. Running every year between June and October, the route is especially popular with tourists, as it includes a vintage steam locomotive and five historical carriages which run the distance between Régua and Tua. Together with the Steam Locomotive passing through the beautiful landscape, the unique journey is sought after and immensely popular, which is classified by UNESCO as a World Heritage Site.

The coins are designed by plastics artist José Santa-Bárbara and are minted in both sterling silver and cupro-nickel, which shares the same design. The obverse side depicts the Portuguese Railways’ emblematic steam locomotive 0186 that was built in 1925 and still today continues to run on the historic Douro Line between the stations of Régua and Tua. Above the primary design is the text COMBOIOS HISTÓRICO (“Historic Trains”) with the additional text LINHA DO DOURO shown below.

The reverse side, which is common to all coins in the series, includes the crests of each Ibero-American country participating in this year’s series. From the top clockwise are the crests arranged along the rim are Ecuador, Spain, Guatemala, Nicaragua, Paraguay, Peru, and Portugal. In the centre is a further Portuguese crest along with the denomination of the coin, 7.5€, and the year of issue, 2020.

The silver Proof coins are encapsulated and presented in a presentation case, with a base created out of rich Portuguese cork placed over a square of lucite/Perspex. For additional information about these coins and others available from the INCM, please visit their website.