The Imprensa Nacional Casa da Moeda (INCM) have launched their latest collector coin which marks both Portugal’s anniversary as a Republic and 100 years since the country’s first commemorative coin was issued. The inventive coin has a range of unique technical and visual features which includes a gold disc set into the rim of a larger silver disc using an innovative minting process. Due to the specific way in which the two discs fit together, the smaller disc protrudes over the perimeter of the larger one, resulting in the world’s first eccentric (not placed centrally) bimetallic coin.

Portugal celebrates the 5th October as Revolution day which overthrew King Manuel II of the Braganza dynasty and established the Republic. The escudo was introduced on the 22nd May 1911, after the revolution, to replace the Real at the rate of 1,000 réis to 1 escudo. Between 1912 and 1916, silver 10, 20 and 50 centavos and 1 escudo coins were issued. On the 4th anniversary of the Revolution, a beautiful silver coin was issued, which included a reclining allegorical figure representing the Republic and with the country’s anniversary date “5 OUITUBRO de 1910” on the obverse. The crest of the new republic along with the coin’s denomination was seen on the reverse. The year 2014 marks 100 years since the Republic’s first commemorative coin was issued. This historical milestone forms part of the genesis of the INCM and is being celebrated with the issue of the innovative new coin. 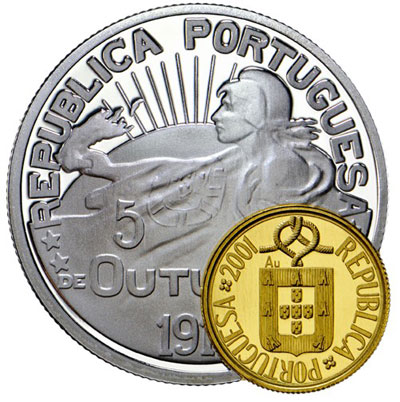 Designed by Nuno Caetano, the obverse of the silver portion is a faithful copy of the obverse design of the coin issued in 1914, the first to bear the face value of 1 escudo. A reproduction of the last commemorative escudo coin (1 gold escudo) is found in the gold area on the obverse, resulting in a single face containing two images. 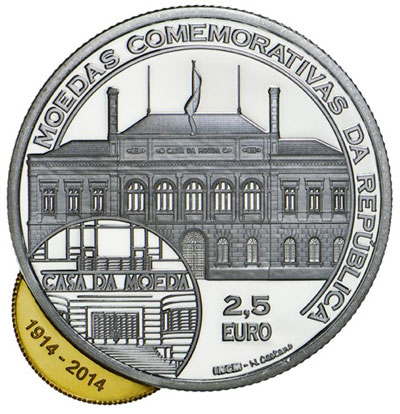 The coin has a combined weight of 12.8 grams. The INCM are currently accepting pre-orders ahead of the coin’s October 1st official issue date. The INCM have indicated that a higher than expected interest in this piece has been expressed by collectors and urge orders to be filed at soon as possible.

For more information on this and other coins offered by the Impresa Nacional Casa da Moeda or INCM, please visit their website at: https://www.incm.pt/portal/loja_detalhe.jsp?lang=en&codigo=102434 Information offered in Portuguese and English, international orders dispatched.