The Imprensa Nacional Casa do Moeda or, INCM has issued a new collector coin which celebrates the 35th anniversary of the country’s National Health Service, the Serviço Nacional de Saúde which was inaugurated on the 15th September 1979. The service was formed as a means to preserving the right to the protection of individual and collective health and ensuring access to health care for all citizens, regardless of their socioeconomic status.

Since its inception, the Portuguese Health Care System has been ranked number 12 in overall performance by the World Health Organization in a 2000 report ranking the health care systems of each of the 190 United Nations member nations. The Ministry of Health is responsible for developing health policy as well as managing the NHS with real noticeable overall benefits since 1979 resulting in the average life expectancy in Portugal in 2012 being recorded at 79.7 years. Portugal’s infant mortality rate has dropped sharply since the 1980s, when 24 of 1000 newborns died in the first year of life. It is now around 3 deaths per 1000 newborns. This improvement was mainly due to the decrease in neonatal mortality and attributed to the care practices of the NHS. 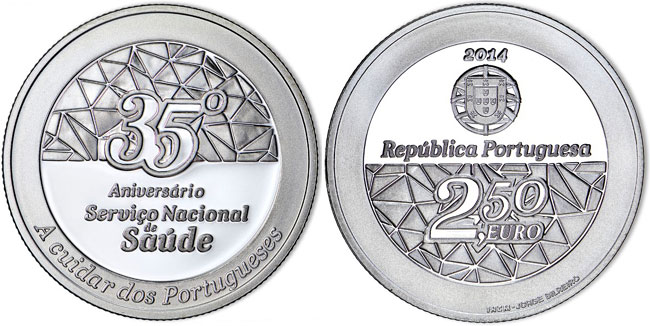 The silver coin is packaged in a black custom presentation box with certificate. For more information on thi sand other coins offered by the Imprensa Nacional, please visit their website at: https://www.incm.pt/portal/loja_moedas.jsp Information offered in both English and Portuguese, international orders dispatched.