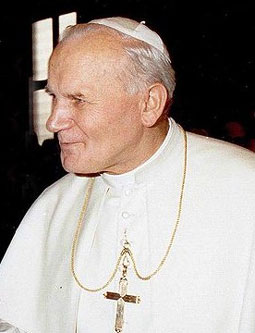 The Treasury of the Government of Niue have launched (21st March) a most unusual coin which marks the anticipated canonization of one of the most popular and beloved Popes in the Roman Catholic Church in living memory – that of His Holiness Pope John Paul II.

In 1978, the world was stunned following the unexpected death of the newly elected Pope who took the name John Paul after his two predecessors, John XXIII and Paul VI. Albino Luciani (1912 – 1978) a cardinal since 1973 and dubbed “the smiling Pope” for his friendly smile and expression had died in his sleep just 33 days after his election as Pope and is now remembered for one of the shortest reigns of the pontificate. Ten days after the smiling pope’s funeral, a papal conclave was organized to choose his successor and just two days after the conclave was organized, white smoke arose from the Sistine chapel to announce that Karol Józef Wojtyła, a 58 year old cardinal from Krakow, Poland was elected with 99 of the 111 eligible votes cast.

Cardinal Wojtyla was the first non-Italian cardinal to be elected to the papacy since 1523 and ended up serving as pope for more than 25 years, the second-longest reign in papal history. Upon his election, he chose as his regnal name John Paul II, in honor of his immediate predecessor and also in memory of Pope Paul VI, the pope who promoted him to the College of Cardinals in 1967. Karol Józef Wojtyła was born in the Polish town of Wadowice in 1920. In 1939, Nazi German occupation forces closed the universities after invading Poland. Able-bodied males were required to work, so from 1940 to 1944 Wojtyła variously worked as a messenger for a restaurant, a manual laborer in a limestone quarry and for a chemical factory, to avoid deportation to Germany. On finishing his studies at the seminary in Kraków, Wojtyła was ordained as a priest on All Saints’ Day, 1 November 1946. In July 1958, Pope Pius XII appointed him as the Auxiliary Bishop of Kraków and in January 1964, Pope Paul VI appointed him Archbishop of Kraków.

John Paul II was one of the most influential leaders of the 20th century. During his pontificate, Pope John Paul II visited 129 countries, traveling more than 1,100,000 kilometers or 680,000 miles whilst doing so. He consistently attracted large crowds, some among the largest ever assembled in human history. John Paul II has been credited with being instrumental in bringing down Communism in Central and Eastern Europe by being the spiritual inspiration behind its downfall and catalyst for “a peaceful revolution” in Poland. Lech Wałęsa, the founder of the ‘Solidarity’ labor movement and later Poland’s democratically elected President credited John Paul II with giving Poles the courage to demand change.

As the new Pope entered St. Peter’s Square to address an audience on 13th May 1981, he was shot and critically wounded by an expert Turkish gunman who was a member of a militant fascist group. The Pope was shot in the abdomen and had lost consciousness on his way to hospital. John Paul II instructed the doctors not to remove his Brown Scapular during the gastric operation which was performed to save his life. The pope stated that Our Lady of Fátima helped keep him alive throughout his ordeal. In later years, the Pope had suffered several health concerns, most notably, Parkinson’s disease which debilitated him considerably in his final years. On the 2nd April 2005, the second-longest serving pontiff slipped into a coma after suffering several bouts of influenza and septic shock. He died the same day at 21:37 CEST, a month and a half short of his 85th birthday.

Inspired by calls of “Santo Subito!” (Make him a Saint Immediately!) from the crowds gathered during the funeral Mass which Joseph, Cardinal Ratzinger – later Pope Benedict XVI performed, he began the beatification process for his predecessor, bypassing the normal restriction that five years must pass after a person’s death before beginning the beatification process. 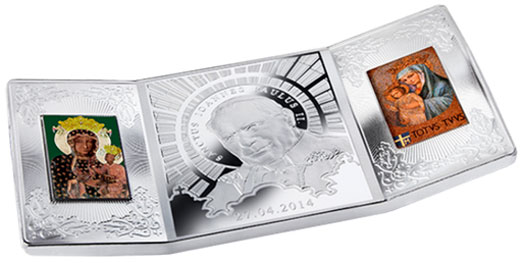 The new coin, unusual in its overall shape and production, is described as atriptychcoin designed to commemoratethe canonization of one of themost cherished Popes in the history of the Church.

An impressive rectangular-shaped coin is emphasized by its unique design with side walls folded back for efficient exposure. It is the pure form of innovation – multicolored images of the world renowned Black Madonna and Mary, Mother of the Church which were digitally printed on thin pieces of glass inserted into the coin.

The reverse design of the central part of the coin, an image of John Paul II is surrounded by a halo with an inscription: SANCTUS IOANNES PAULUS II. Below is an outline of St. Peter’s Basilica and the date for canonization of John Paul II: 27.04.2014. On the both sides of the pope are multicolored images of the Black Madonna of Częstochowa and Mary, Mother of the Church from the Colonna Chapel. 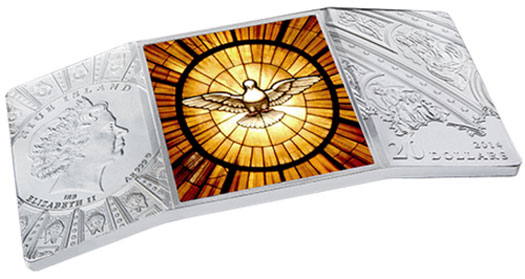 This unusual coin is housed in a specially designed presentation box along with certificate of authenticity. The Mint of Poland, makers of this extraordinary tribute are accepting pre-issue orders – but expect this coin to be over subscribed many times over, please contact their sales department directly at:   for complete ordering information.