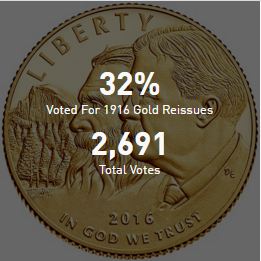 Our latest Coin Update poll asked readers which 2016 U.S. Mint product release they were most excited about and the results are in. Surprising no one, the upcoming gold reissues of three classic 1916 circulation coins are easily the most anticipated items of the year, garnering 32% of the votes.

Whether or not you’re planning to buy a gold Winged Liberty (“Mercury”) dime, Standing Liberty quarter, or Walking Liberty half dollar, it’s clear this is one of the more inspired releases of the past few years. Some of us are a little disappointed these issues will not be available in silver, but reasonable people have argued that if you’d like a silver version, you can just track down the original circulation coins. If silver collectors are feeling left out, it’s only because this coin program looks so promising. We know that the gold Mercury dime will be released on April 21, but the launch dates for the other two issues have yet to be established. We’ll see how long the Mint keeps us in suspense. 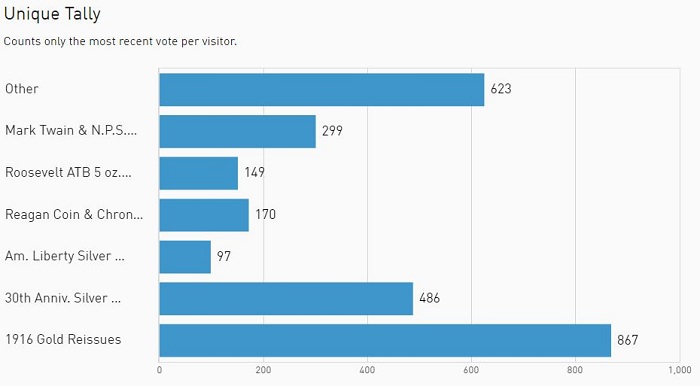 As is often the case with polls like this, limited space prevents us from fully representing the wide variety of options that will be available to collectors this year. This means that many voters did not see their product of choice included in the poll, and chose to vote “Other.” Votes in the “Other” category constituted the second-largest total overall, which makes sense as so many products are lumped together under this umbrella. If you voted “Other,” we hope you’ll share which item you’re anticipating in the comments.

The 2016 commemoratives, Coin & Chronicles Set, and Roosevelt five-ounce coin each garnered a reasonably predictable number of votes, but I was a little surprised by the discrepancy that arose between the American Liberty Silver Medals (fairly low at 97 votes) and the 30th Anniversary Silver Eagles (high at 486 votes). It is of course expected that this year’s Silver Eagles will be greeted by high demand, as they are part of the Mint’s most popular series and will boast unique features, such as a smooth — rather than reeded — edge. But the Medals will be unique as well and could, one would think, appeal to many of the collectors anticipating the Silver Eagles. It will be interesting to watch how predictive of sales these results are once these issues are released later in the year.

The final percentages for each voting option are included on the chart below. As always, thanks to all who voted.