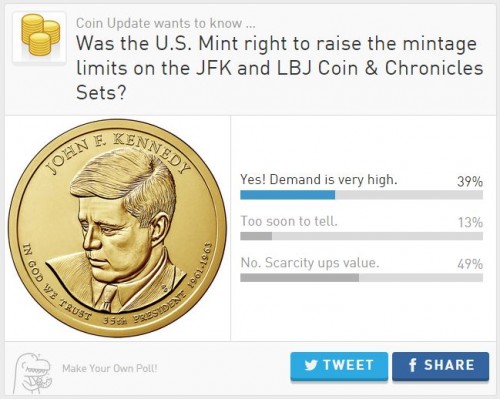 The numbers are in for our first Coin Update poll and the results are a bit surprising. Asked whether the U.S. Mint was right to raise mintage limits on the upcoming John F. Kennedy and Lyndon B. Johnson Coin & Chronicles Sets, a solid majority (49%) said “no,” the increased inventory would go too far toward diluting the long-term value of the sets. The mintage limits for the Kennedy and Johnson sets were increased to 50,000 and 25,000 units, respectively, after the Truman and Eisenhower sets were capped at 17,000.

The result was by no means a landslide, with 39% of respondents expressing their support for the mint’s decision to boost production. Following the Web site-crashing frenzies that greeted the Truman and Eisenhower C&C set launches—which saw available inventory for the products exhausted in 15 minutes or less—many collectors voiced their frustration with the mint’s handling of such highly-anticipated product releases. The natural thing to do going forward, some suggested, would be to increase the mintage limits to give more buyers a chance. This might also serve to ease the traffic glut at the 12 o’clock starting bell the day of the release, as interested customers begin to feel comfortable waiting to place their orders until the initial flurry of activity subsides.

There was also a not-insignificant minority (13%) who decided that it’s too soon to tell whether or not the mint has made the right move as it attempts to improve customer service and square supply with demand. It’s not hard to sympathize with this position, as the upcoming Kennedy set is a bit of a wild card; this set will have significantly higher mintage in a year the mint can’t keep Coin & Chronicles sets in stock. It also features a president whose likeness has historically been of interest to collectors. 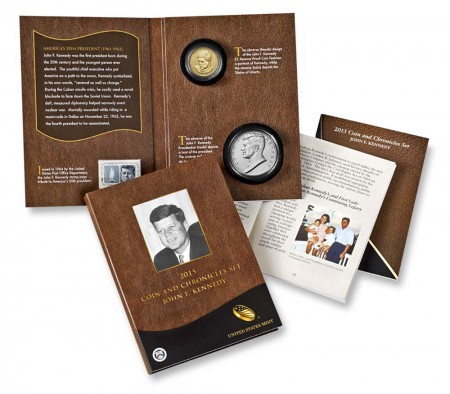 Those who voted “no” undoubtedly appreciate the feeling of watching a set you’ve purchased for $57.95 instantly triple in value as supply is trumped by demand. And a lower mintage usually means that the relative scarcity of the sets will secure their value going forward. In its way, a lower mintage is easier to read; it’s dependable. Collectors who get a hold of low-mintage sets like the Truman and Eisenhower issues know they’re purchasing rarity along with the physical coin, medal, stamp, and case included in the set. But this only applies to those lucky enough to have their orders filled.

Perhaps it is a matter of degree; after the Truman and Eisenhower releases, many collectors would get on board with a modest bump in production to allow the most eager buyers a chance at their household order limit on the first day of sales. But the question arises: how much more should the mint make? Should they shoot for inventory to last a day, a week, a month? And at what point does a higher mintage start to soften demand? It’s possible that at least some of those who voted “no” felt a small boost in mintage limits was warranted, but that the mint went too far with its increases.

One thing is certain: the release of the John F. Kennedy Coin & Chronicles Set at noon tomorrow will be worth paying attention to. Thanks to everyone who participated in the poll.