The National Bank of Poland has issued a new coin which celebrates the 25th anniversary of the restoration of democracy in the country which was achieved with the total collapse of the communist government in 1989. Following the defeat of occupying Nazi forces at the end of the Second World War, the Soviet army who had liberated Poland now became their new occupiers and imposed a communist style government of the Republic and people of Poland. The nation of 24 million people were integrated in the new communist sphere of influence and eventually made a part of the Warsaw pact of Nations, the Soviet Union’s alternative to NATO. The USSR imposed a heavy hand on Poland which was to last more than 44 years and severely limited the freedoms of the population by stationing more than half a million Soviet troops in the country from the end of World War Two – lasting more than ten years. The troop numbers were eventually reduced over the ensuing years but not their strangle-hold on the country. What emerged in 1952 was the Polish People’s Republic, the unofficial status of a satellite state of the Soviet Union and a Marxist-Leninist single-party state.

With the accession of Mikhail Gorbachev in the USSR and an era of “Glasnost” the cracks of the communist system were beginning to show more prominently – emboldening many Poles to challenge the communist authorities and demand greater freedoms and an end to Soviet Troops on their soil. As early as 1980, a trade union which was known as Solidarnosc or Solidarity, something which had been against communist Polish law – had been founded by electrician Lech Walesa in the Gdansk shipyards. With a massive nine million members, it was soon recognized by communist authorities as a great threat to their strangle-hold on power in the country and declared it illegal. The Trade union was also encouraged and supported in staunchly catholic Poland by the Pontiff, Polish-born Pope John Paul II.

In 1989, facing significant pressure from the population, the country’s military leader appointed its first non-communist head of government since 1948 and the Polish parliament soon amended the country’s constitution to formally restore democracy on the 29th December, and thus ushering in the Third Polish Republic. 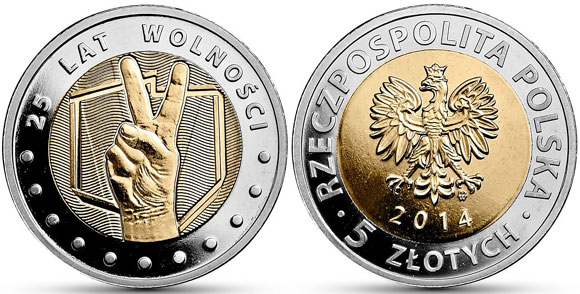 The coin, designed by Dobrochna Surajewska and minted by the Mint of Poland in Warsaw, is a 5 Zloty circulation bi-metalic piece. The obverse design includes an insignia of a right hand holding up the “peace” sign. Text above the primary design reads “25 LAT WOLNOŚCI” (25 years freedom) The reverse includes the crowned eagle, the national symbol of the Republic of Poland along with the denomination and year of issue.