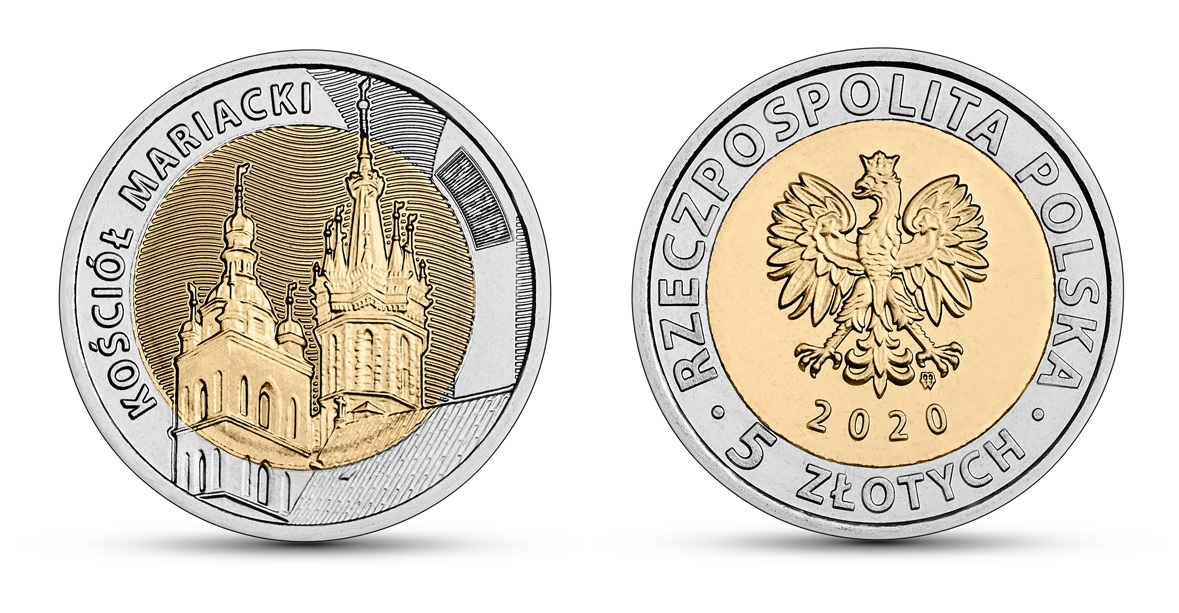 The National Bank of Poland has released (22nd May) new silver Proof coins with a stained glass insert to mark an extraordinary anniversary. This year, 2020, is the 700th anniversary of the consecration of the Gothic St. Mary’s Basilica in Kraków, as the history of this historical church goes back to the 1220s. According to chronicler Jan Długosz, the first parochial church was founded at the site in 1221–1222. The bishop of Kraków, Iwo Odrowąż, established the parish by transferring it from the Church of the Holy Trinity, which was allocated to the Dominican friars when they arrived in Kraków.

Between the years 1290 to 1300, a new church in early Gothic style was erected partly on its original foundations and was consecrated in 1320 by Bishop Nanker. Over the following centuries, the building underwent numerous alterations which included an extended single-nave presbytery under a stellar vault that was built in the second half of the 14th century. Stalls under canopies were added on both sides of the presbytery in the 16th century, and in the following century, they were equipped with backrests decorated with low reliefs featuring scenes from the lives of Jesus and the Virgin Mary. Landmarks of Krakow were enriched with a grand altarpiece, a late Gothic sculptural masterpiece by Master During the years 1477 to 1489, Saint Mary’s church, which had become one of the most readily recognised Veit Stoss (Wit Stwosz).

The pentaptych, consisting of the five doors and panels depicting various religious saints situated at the altar, was consecrated to the Virgin Mary. In the 18th century, in the time of Mitred Prelate Jacek Łopacki, the church interior was thoroughly modernised in the late Baroque style. By 1795, the church cemetery was deconstructed to construct St. Mary’s Square, which was built on its grounds, and at that time, some of the extant epitaphs were transferred onto the church walls. In the late 19th century, Tadeusz Stryjeński headed another extensive restoration of the Basilica. During this time, Jan Matejko designed painted decorations for the presbytery, which were created by Stanisław Wyspiański, Józef Mehoffer, and other well-known artists of the day.

The Basilica’s interior and ceiling vault imitates a starry sky, and paintings cover the walls with ornamental and heraldic motifs. The last thorough renovation of the church interior was carried out at the beginning of the 21st century, and currently, the Veit Stoss Altarpiece and the organ are undergoing a thorough restoration. 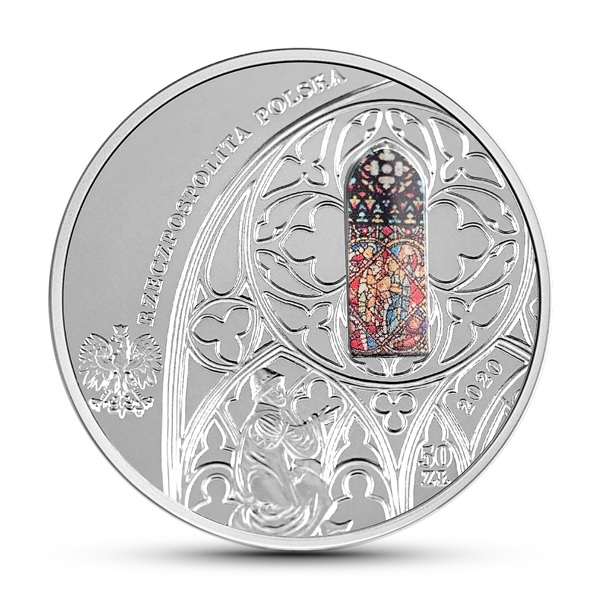 The large-size Proof quality coins with a precise replica of one of the Basilica’s stained glass panes are produced by the Mint of Poland at their facilities in Warsaw, on behalf of the National Bank of Poland, and are designed by Sebastian Mikołajczak. The obverse of the coins features, on the right side, a fragment of a presbytery window from St. Mary’s Basilica in Kraków with colourful stained glass representing a late-Gothic tracery with floral patterns. At the bottom, it features the figures of Mary and Joseph presenting the infant Jesus at the temple. In the middle, there is an image of the figure from the predella or platform on which an altar is placed of the Veit Stoss Altarpiece representing the Jesse Tree. The denomination of 50 ZL and the year of issue, 2020, are also included as part of the overall design. 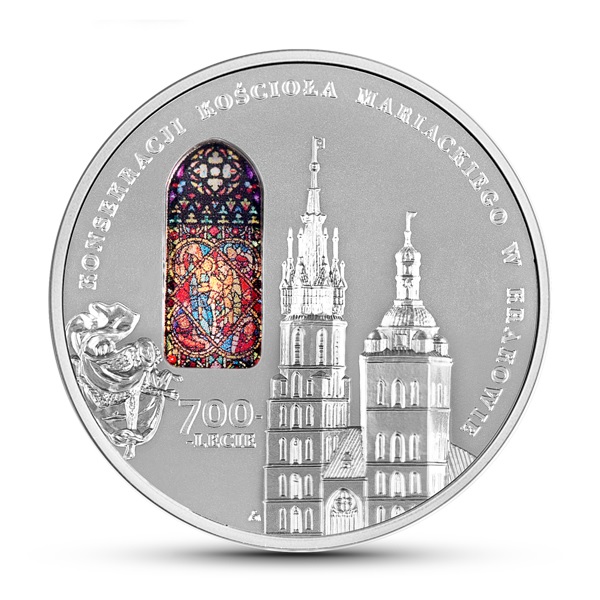 The reverse of the coin features an image of St. Mary’s Basilica in Kraków on the right, and a colourful stained-glass window on the left. The inscription KONSEKRACJI KOŚCIOŁA MARIACKIEGO W KRAKOWIE (“Consecration of St. Mary’s Church in Kraków”) is placed above and towards the right with the additional inscription 700 LECIE (“700th anniversary”) placed just below the glass window insert. 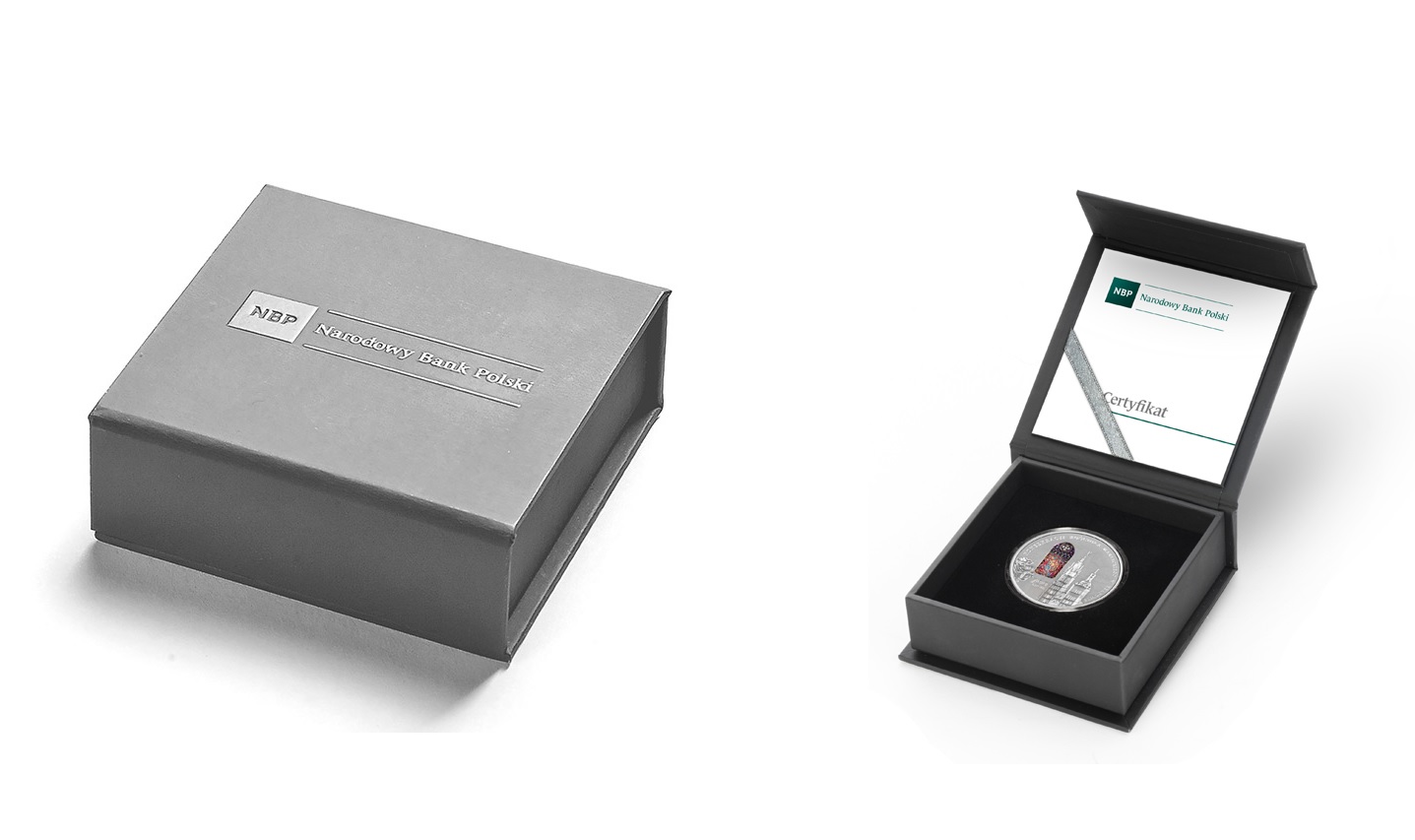 Each coin is encapsulated and presented in a custom heavy-gauge lined card case and is accompanied by a certificate of authenticity.

Circulation-type five-zlotych coins have also been issued to mark the 700th anniversary of the consecration of St. Mary’s Basilica in Krakow and are available in banks and post offices from the 22nd May.