The National Bank of Poland have issued  four coins which mark the historic canonization of the late Pope John Paul II, a native of Poland and the country’s most revered and beloved men in the modern era. Just nine years after the legendary Pope’s death, the Roman Catholic Church have acquiesced to the demands of the faithful to proclaim John Paul II a saint. This was done on the 27th April together with one of his earlier predecessors, John XXIII whose papacy ended in 1963. The world’s first ever Polish pope holds a very special place in the heart of Poles and the nation, who consider him not only the nation’s favorite son but as someone who was instrumental in bringing down the much distrusted and resented communist government which was imposed on it by the Soviet Union since the end of the second World War. It is felt by many in Eastern Europe that Pope John Paul II worked ceaselessly to end communism on the continent. 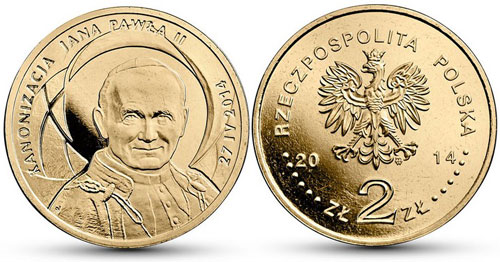 In 1978, remembered as the year of three popes, events took a different direction following the very unexpected death of the newly elected Pope who chose to be known as John Paul after his two predecessors, John XXIII and Paul VI. Albino Luciani (1912 – 1978) known as “the smiling Pope” for his friendly smile and expression died in his sleep just 33 days after his election and is now remembered for one of the shortest reigns in the history of the Roman Catholic Church. Ten days after Pope John Paul I’s funeral, a papal conclave was organized to choose his successor. Two days after the conclave was organized, white smoke arose from the Sistine chapel and history was made in declaring that Karol Józef Wojtyła, a 58 year old cardinal from Krakow, Poland had been elected with 99 of the 111 eligible votes cast. Upon his election, he chose as his regnal name John Paul II, in honor of his immediate predecessor and also in memory of Pope Paul VI, the pope who promoted him to the College of Cardinals in 1967. Cardinal Wojtyla was the first non-Italian cardinal to be elected to the papacy since 1523 and as he ended up serving as pope for more than 25 years, his is the second-longest reign in papal history. As the most traveled pope ever, he visited more than 129 countries on every inhabitable continent and personally touched the lives of more followers and admirers than any pope before or since. 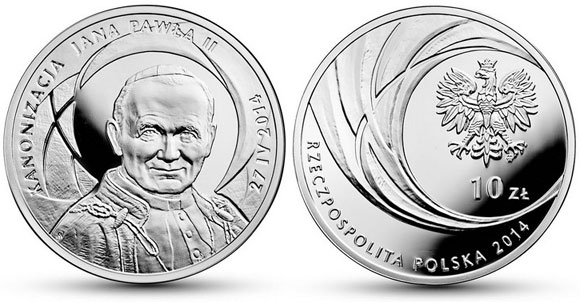 As part of his beatification, leading to his upcoming canonization, John Paul II was credited with two miracles. The late pope is said to have cured the mayor of Huila in Colombia who testified that he was “miraculously cured” of Parkinson’s disease through the intercession of John Paul II. A second alleged miracle is reported to be the healing of Costa Rican woman – on the date of John Paul’s beatification, of a terminal brain aneurysm. A Vatican panel of expert theologians examined the evidence, and have determined that it was directly attributable to his intercession and thus have recognized it as miraculous. 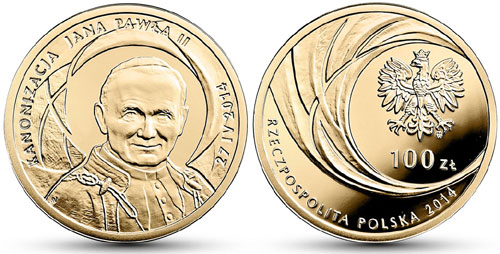 The four coins, two of which are silver and one gold, are produced by the Mint of Poland at their facilities in Warsaw and carry the same designs uniformly on both the obverse and reverse.  In the central part of the coin is an image of John Paul II which is closely based on an actual photograph by Grzegorz Galazka.  In the background is a stylized decorative pattern. Along the top rim is the text of the coin’s commemoration in Polish which reads “KANONIZACJA JANA PAWŁA II, 27 IV 2014” (Canonization of John Paul II, 27 IV 2014) The reverse of the coin includes an image of a crowned eagle from the coat of arms of the Republic of Poland. Below the eagle is the face value (2 – 10 – 100 or 500 zł) At the bottom part of the coin and along the lower rim is the inscription:  RZECZPOSPOLITA POLSKA (Republic of Ppland) and the year of issue, 2014.

The Mint of Poland have set the mintage numbers accordingly with the 2, 10 and 100 zloty coins. In the case of the 500 Zloty silver coin, the number of pieces has been set specifically to 966 pieces, this number having significance to the country as it is the year, 966 in which the country of Poland and its people were brought into the Christian faith.

For more information on these and other coins issued by the National Bank of Poland, please visit the website of the Mint of Poland at: http://www.mennica.com.pl/en/mint-of-poland-plc-collector-coins-commemorative-coins.html or e-mail their sales & marketing office at:   who will advise about the nearest distributor or assist with direct retail sales. Information offered in English and Polish.