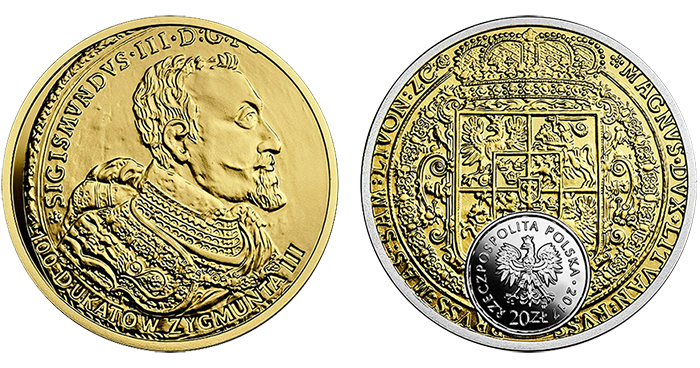 The Bank of Poland have issued (12th July) a new coin which is part of their ongoing “History of Polish Coins” series. The latest coin focuses on the famed 100 ducats of Sigismund Vasa, and is selected to illustrate the history of Polish coinage in the first half of the 17th century. 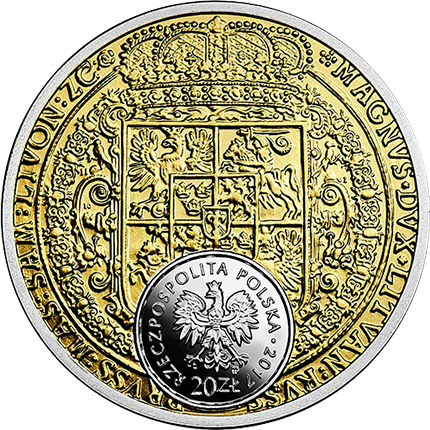 The coin is produced by the Mint of Poland on behalf of the Narodowy Bank Polski and is designed by Dominika Karpińska-Kopiec. The reverse of the modern coin is a recreation of the king’s bust from the obverse of the historic coin, and an inscription under the bust which reads: 100 DUKATÓW ZYGMUNTA III (100 ducats of Sigismund Vasa). 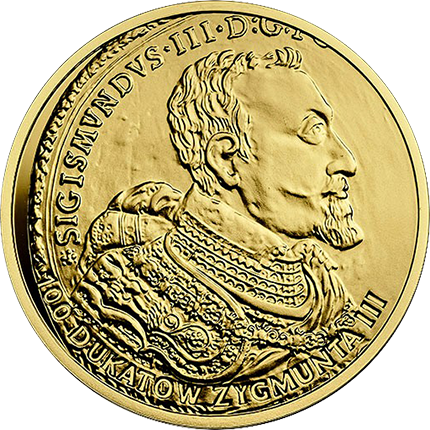 The obverse of the modern coin depicts the reverse of the historic coin and, in line with tradition, the image of the Polish state insignia, with the eagle, the name of the state, the face value, the year of issue, and the denomination. These elements are included in what appears to be a modern piece superimposed over the historical gold crown.

The sterling silver, Proof-quality coin is the 11th in this ongoing series, and is selectively gold-plated to re-create the golden colour of the original ducat. The coin is encased in a protective capsule and included in a custom presentation box with certificate of authenticity. Please visit the website of the Mint of Poland for additional information on this and other coins issued by the National Bank of Poland. 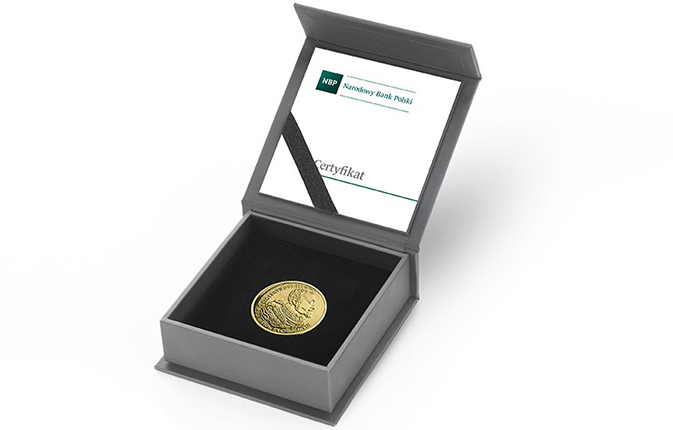 The Gold Ducat of Sigismund III Vasa: An Ornament and a Safeguard

The reign of Sigismund III Vasa (1537–1632) was considered a golden era in the history of Polish coinage. Born in Sweden as the eldest son of King John III of Sweden and Catherine Jagiellon, a Polish princess, he was elected to the united Polish-Lithuanian Commonwealth in 1587. Sigismund also succeeded his father as king of Sweden in 1592 and sought to unite both crowns until his deposition from the Swedish throne in 1599 by his uncle, who became king as Charles IX of Sweden until his death in 1611.

Various mints were in operation at that time and in addition to the old facilities, new ones were also launched, the most important of which being located in Bydgoszcz, Poland. All these mints were producing—with certain interruptions—great quantities of coins of various denominations. Minting was affected by various European economic crises of the time, and as a result the smaller silver coins were suffering from inflation. These crises did not affect full-value gold coins, however, and in this regard the national economy was particularly interested in a coin with a weight equalling the 100 ducats minted in Bydgoszcz. The dies used to mint the coin were prepared by the excellent Gdańsk-based medalier Samuel Ammon (1591–1622), who came from Schaffhausen in Switzerland. On the obverse he depicted a right-facing bust of the king, unusually without a crown and in a richly ornamented armour. Under the bust, the coin carries the medalier’s initials SA and the date 1621. Along the rim is an inscription: ESIGISMVNDVS·III·D:G:POLONI·ET ·SVECIÆ·REXE. (Sigismund III By the Grace of God, King of Poland and Sweden).

On the reverse, beneath the crown, is a nine-field shield with the coats of arms of Poland and Lithuania as well as Sweden and Gotland, and the Vasa crest (sheaf of hay) in the middle. On both sides of the shield are the initials of the mintmaster of the Bydgoszcz mint, Jacob Jacobson van Emden: II on the left and VE on the right. Above the crown are the numerals representing the year: 16 and 21. Along the rim is a continuation of the King’s legend: EMAGNVS·DVX·LITVAN:RVSS: – :PRVSS:MAS:SAM:LIVON:ZC:E (Magnus Dux Lituaniae, Russiae, Prussiae, Masoviae, Samogitiae, Livoniae et cetera, i.e., Grand Duke of Lithuania, Ruthenia, Prussia, Masovia, Samogitia, Livonia etc.).

It was the most impressive Polish coin minted, originally measuring almost 70 mm in diameter and weighing as much as 348.3 grams of gold. The issue was most likely ordered by the king, who needed gifts for the most distinguished guests and dignitaries. Only a few original coins of full weight survive to this day. There are some surviving coins which are lighter in weight, at 90, 60, or 30 ducats, and even silver coins weighing 10 or 3.5 thalers. Interestingly, all of these coins were minted with a single pair of dies.   ❑