Taya Pobjoy, Managing director of the Pobjoy Mint, was recently accorded an opportunity to present a coin to Pope Francis on the day of his anniversary of having been elected to the Papacy. On Wednesday the 26th March, Ms. Pobjoy, visited Vatican City and was honored to present a coin produced by the privately owned and operated Pobjoy Mint which included an effigy of Holiness Pope Francis celebrating his accession as the newest Pontiff in 2013. 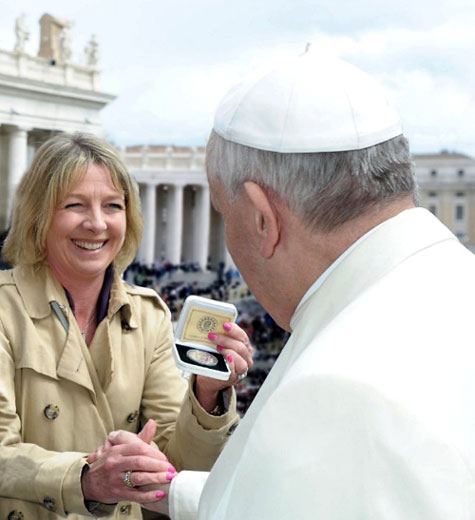 The coin, which was presented just after the First Anniversary of his election, was issued by the Central Bank of the Seychelles, which was the first coin world-wide to carry the new Pope’s likeness. Pope Francis appeared both pleased and interested to view this special new coin which features a Cameo of him in profile surrounded by a rosary and images of the 14 Stations of the Cross which appear in every Catholic Church around the World and which tells the story of Christ’s Condemnation by Pontius Pilate, his Crucifixion, and death. 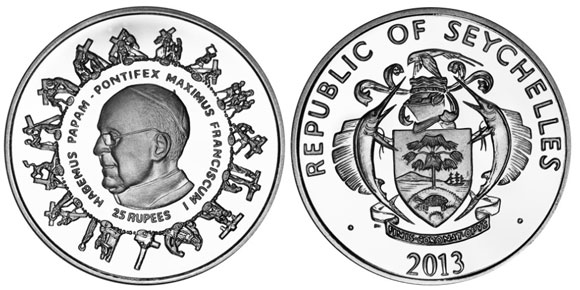 After the presentation, Ms. Pobjoy commented that she felt very lucky to have been allowed to meet His Holiness on such a special occasion. The Seychelles, a predominantly Catholic Country, had been visited by Pope John Paul II in 1986 and will shortly be issuing a new coin to celebrate the Canonization of Pope John Paul II on 27th April 2014 when he will become Patron Saint of World Youth Day.

For more information on this and other coins issued by the Republic of Seychelles, please visit the website of the Pobjoy Mint at: http://www.pobjoy.com/ukworld/section.php?xSec=1410 Information offered in English – international orders dispatched.