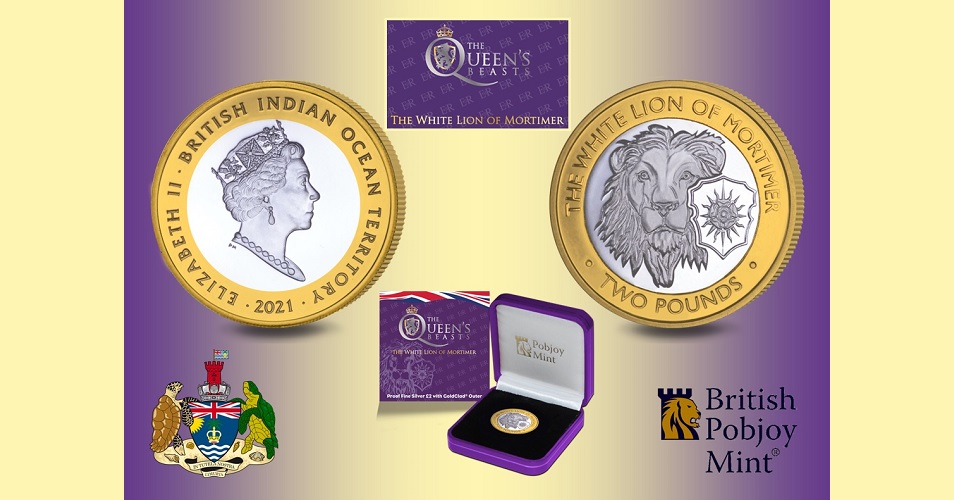 The government and treasury of the British Indian Ocean Territory has released their sixth coin in their popular series featuring the Queen’s Beasts. This 10-coin programme focuses on the mythical and actual beasts used in heraldry and also representing the genealogy of Queen Elizabeth II. As Her Majesty Queen Elizabeth II celebrated her 95th birthday in April 2021, the series of coins featuring the Queen’s Beasts is a fitting tribute to celebrate this event, a milestone that no other British monarch has reached.

The series is inspired by the tall statues that were commissioned to stand at an entrance of Westminster Abbey for Her Majesty’s coronation in June 1953. Each beast is depicted as a loyal supporter of England with every design including a supporting shield bearing the badge or arms of a family associated with the ancestry of the British monarch.

The sixth coin in the series features the White Lion of Mortimer whose relation to the Queen comes from Edward IV through Anne de Mortimer. She was a medieval English noblewoman who became an ancestress to the royal House of York, one of the parties in the 15th-century dynastic Wars of the Roses. It was her line of descent that gave the Yorkist dynasty its first claim to the throne and therefore passing along the heraldic beast known as the “White Lion of Mortimer.” The lion’s history extends over 500 years and unlike the Lion of England, this beast is uncrowned.

The bi-metallic coins are produced by the Pobjoy Mint at their facilities in Surrey, England, on behalf of the treasury of the British Indian Ocean Territory. The design on the coin shows the face of the White Lion of Mortimer alongside the “white rose en soleil,” a combination of two badges showing a white rose encircled by a golden sun. Both symbols were used as part of the Great Seals of King Edward IV and King Richard III as well as the Duke of York — who later became King George VI in 1936 and father of Queen Elizabeth II. Above the primary design is the text WHITE LION OF MORTIMER and below is the denomination of TWO POUNDS.

The obverse side includes an effigy of HM Queen Elizabeth II as created by the Pobjoy Mint and is an exclusive design. The issuing authority BRITISH INDIAN OCEAN TERRITORY surrounds the Queen’s likeness and the year of issue 2021 is seen just below.

Each Brilliant Uncirculated coin is presented in a blister-type coin card format with informative text and images pertaining to the White Lion of Mortimer. The sterling silver Proof examples are encapsulated and presented in a custom case accompanied by a certificate of authenticity. For additional information about this coin and the other coins in the series, please visit the website of the Pobjoy Mint.