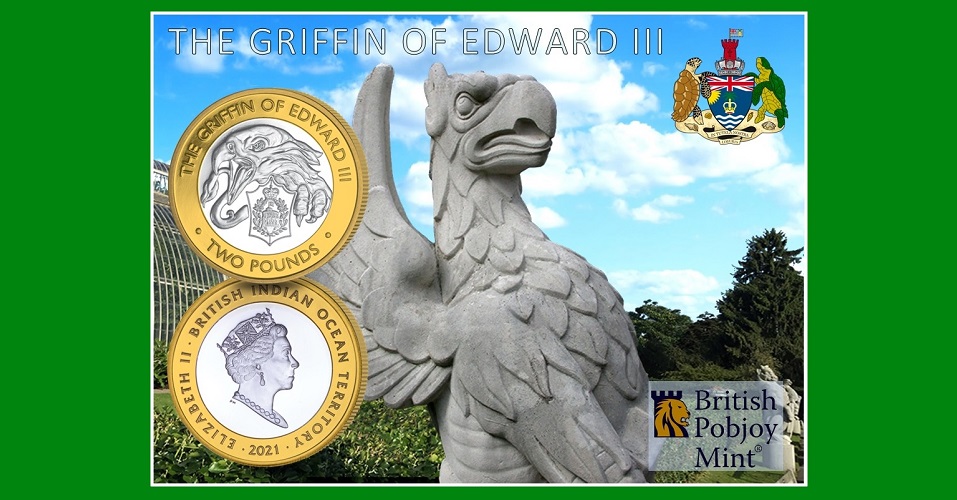 The government and treasury of the British Indian Ocean Territory have released the eighth coin in their popular series featuring the “Queen’s Beasts,” 10 heraldic statues representing the genealogy of Queen Elizabeth II. Each one is depicted as a royal supporter of England and is accompanied by a shield or crest bearing the badge or arms of a family associated with the ancestry of the British monarch. 10 original statues were commissioned by the British Ministry of Works from sculptor James Woodford to stand at an entrance of Westminster Abbey for Her Majesty’s coronation in 1953. Cast in plaster, the six-foot-tall statues were relocated to the Great Hall in Hampton Court Palace after the coronation.

This 10-coin programme focuses on the mythical and actual beasts used in heraldry that represent the genealogy of Queen Elizabeth II, who celebrated her 95th birthday this year. Featured on the eighth coin is the griffin, a mythical creature with the body, tail, and back legs of a lion and the head and wings of an eagle. It is said griffins represent a combination of courage, strength, guardianship, and leadership as they’re meant to have the natural keen vision and swiftness of the mighty eagle.

The Griffin of Edward III and its relation to the Queen comes from the king himself, founder of the Order of the Garter, and who engraved the griffin on his private seal, which was the most powerful and authoritative symbol of royal identity. King Edward III used the seal bearing this image of the griffin for 20 years and it is believed he also had bed linen and robes embroidered with the beast.

The bi-metallic coins are produced by the Pobjoy Mint at their facilities in Surrey, England, on behalf of the treasury of the British Indian Ocean Territory. The design on the coin shows a griffin’s head with a shield at the centre showing the Round Tower of Windsor with the Royal Standard flying from the turret, enclosed by two branches of oak surmounted by the royal crown. Above the primary design is the text THE GRIFFIN OF EDWARD III and below is the denomination of TWO POUNDS.

The obverse side includes an effigy of HM Queen Elizabeth II as created by the Pobjoy Mint and is an exclusive design. The issuing authority BRITISH INDIAN OCEAN TERRITORY surrounds the Queen’s likeness and the year of issue 2021 is seen just below.

Each Brilliant Uncirculated coin is presented in a blister-type coin card format with informative text and images pertaining to the Griffin of Edward III. The sterling silver Proof examples are encapsulated and presented in a custom case accompanied by a certificate of authenticity. For additional information about this coin and the other coins in the series, please visit the website of the Pobjoy Mint.