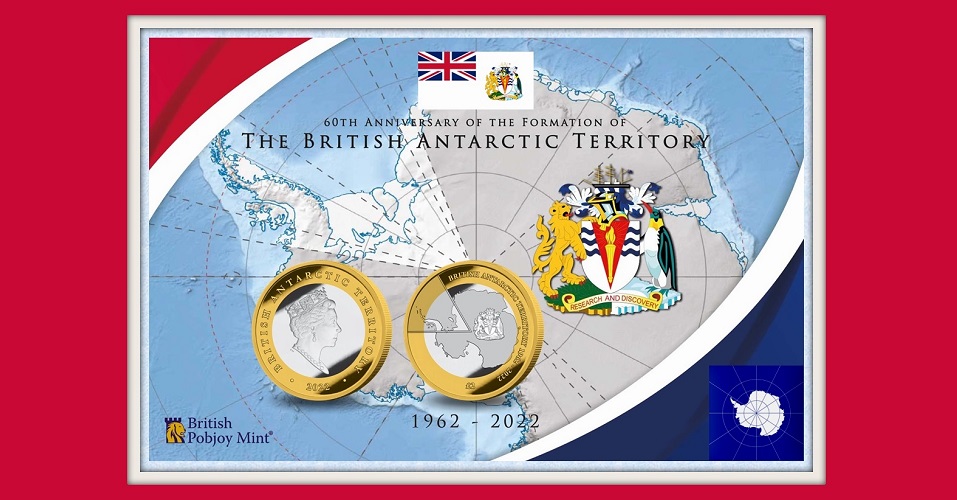 The coins are produced by the Pobjoy Mint at their facilities in Surrey, England, on behalf of the treasury of the British Antarctic Territory. The reverse side of the bi-metallic coins shows an outline of Antarctica with the British Antarctic Territory highlighted within a marked sector alongside the coat of arms and the date of the anniversary. The commemorative text shown above and to the right of the primary design reads BRITISH ANTARCTIC TERRITORY 1962 — 2022, with the denomination £2 placed below. The obverse of the coin features an effigy of Her Majesty Queen Elizabeth II, which is an exclusive design of the Pobjoy Mint.

The Brilliant Unc. base metal bi-metallic examples are presented in a blister-pak type folder with illustrations and informative text highlighting the 60th anniversary of the British Antarctica Territory Treaty. The silver Proof coins are encapsulated and presented in a custom case accompanied by a certificate of authenticity. For additional information about these coins and others issued by the treasury of the British Antarctic Territory, please visit the website of the Pobjoy Mint.

Orders will be dispatched from 27th January 2022