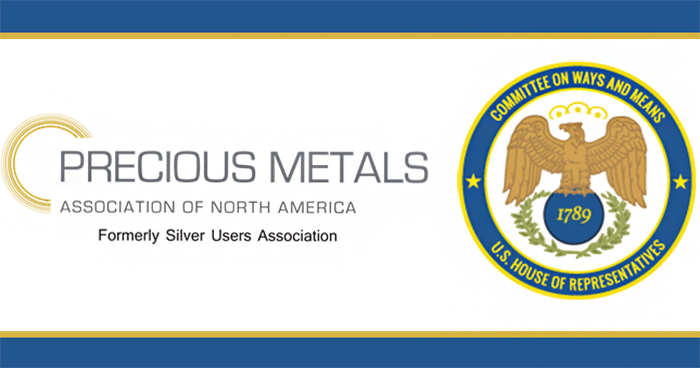 (Washington, D.C.)—Discussions surrounding tax reform have heightened in recent weeks, and the Precious Metals Association of North America (PMANA) has offered testimony before the House Committee on Ways and Means asking for a change in the Internal Revenue Code that would bring fairness to precious-metals bullion and coin investors, while also creating smart investment opportunities for Americans.

Since 1982, gains made on precious-metals bullion have been taxed at the ordinary income rate due to language defining such bullion as a “collectible.” Congress has made numerous attempts to mitigate the effects of this capital gains treatment on precious metals. The Tax Reform Act of 1986 granted the American Eagle family of coins an exemption from the “collectible” definition and allowed them to be included as equity investments in Individual Retirement Accounts. Over a decade later, the Taxpayer Relief Act of 1997 created purity and custody standards that, if met, would exempt bullion coins and bars from the definition while also allowing them in IRAs. Furthermore, precious-metals bullion and coins are purposely designed and produced in a way that excludes any assumption that they are rare or unique collectibles. Instead, bullion and coins are mass produced only as investments in their precious-metal content.

“Since 1986, Congress has taken significant steps to correct this regulatory inconsistency,” said Scott Smith, president of PMANA. “However, the ‘collectible’ definition remains for those investments in precious-metals bullion and coins that have not been exempt. These investments are taxed at the ordinary income rate for collectibles with a maximum rate of 28%—a rate 40% greater than the maximum capital gains rate for equity investments. We want to work with Congress to fix this inconsistency so that the government is not picking winners and losers when it comes to investments in precious metals.”

Unlike collectible coins that are pursued by hobbyists, bullion coins are precious-metal investment vehicles that are traded at the value of the commodity they contain. Since they are not rare, but rather mass produced specifically for investing, their status as a “collectible” for non-IRA investments is misaligned with their function and form. That is why PMANA is asking Congress to amend the Internal Revenue Code to treat gold, silver, platinum, and palladium, in either bullion or coin form, in the same manner as stocks, bonds, and mutual funds for purposes of the capital gains rate for individuals.    ❑