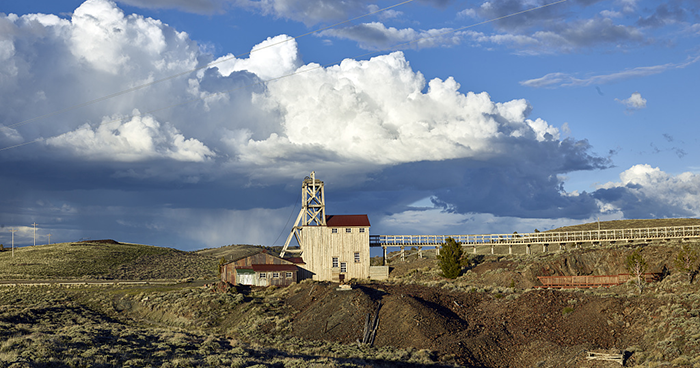 The location of the old Carissa Gold Mine in Fremont County, Wyoming, is a picturesque testament to America’s rich gold- and silver-mining history. Modern U.S. gold mines are the sole sources of metal for American Eagle and American Buffalo gold coins. (Photo by Carol M. Highsmith)

(Washington, D.C.)—The White House has designated this week to be “Made in America” week to “honor the amazing American workers and companies who have products that are made in America,” according to a White House spokesperson. American manufacturers produce some of the finest and highest-quality material compared to their international counterparts. To showcase their pride in their country and products, domestic manufacturers can make claims for Made in America labeling, as long as that they can prove that all, or virtually all, of the product is of U.S. origin.

Jewelers across the country use precious metals that have been recycled from scrap to craft their masterpieces. However, the Federal Trade Commission (FTC) will not allow jewelers to make a Made in America claim because they cannot prove where the recycled scrap metal was originally mined—a task that is nearly impossible. Precious metals like gold can be recycled indefinitely without damaging its quality. In fact, as much as 90 percent of gold jewelry contains recycled materials that may have been mined centuries ago.

“We applaud the president’s efforts to highlight the amazing manufacturing base we have in this country,” added Paul Miller, executive director, Precious Metals Association of North America. “For some reason, federal bureaucracy has gotten in the way of allowing for certain products to be labeled Made in America, which has cost U.S. businesses millions in lost opportunities. We want to work with the president to clarify rules already in place that should make the Made in America labeling available to U.S. manufacturers, but due to incorrect interpretations of current policies, U.S. manufacturers are being held hostage and losing out on millions of dollars going to overseas competitors,” concluded Miller.

In April, President Trump signed the “Buy American” executive order requiring executive-branch projects to use goods, products, and materials produced in the United States, including steel for infrastructure products. Over half of U.S. steel is produced with scrap metal of unknown origin. It simply does not make sense that the recycling of precious metals would be treated differently. Even the gold in Fort Knox would not qualify as Made in America.


We ask President Trump to take his efforts further in promoting Made in America products by allowing for precious metals recycled in the U.S. to be labeled as Made in America, which currently should be the case if you read the rules and regulations in place today. Mr. President, we need your help in getting the correct interpretation of rules already governing this issue.

Editor’s note—Gold American Eagle and American Buffalo coins are, by law, minted entirely from gold mined in the United States. Some gold and silver bars and rounds from private U.S. firms such as Scottsdale Mint, Sunshine Mint, Republic Metals Corporation, and Coin Update sponsor APMEX, however, could conceivably benefit from the policy changes advocated by PMANA.

The Precious Metals Association of North America (formerly known as the Silver Users Association) is a 501(c)(6) non-profit organization that was established in 1947. It represents the interests of companies that refine, manufacture, trade, and distribute products in which precious metals are an essential component.  The association serves as the precious-metals industry’s connection to Washington D.C.   ❑