The Bangko Sentral ng Pilipinas (BSP) — Central Bank of the Philippines have launched (26th March) six new circulation type coins which have entered general use. The new denominations include 10, five, and one-piso values as well as 25, five, and one-sentimo denominations — all of which have undergone completely new designs and specifications. The six coins are produced in a nickel-plated steel alloy or product which the Central Bank decided to utilise in order to discourage the wider public from hoarding coins for their metal content.

The coins are produced using the latest technology in minting and features enhanced security to deter counterfeiting as well as improve wear and corrosion resistance capabilities. In particular, the 10 and five-piso values include micro-printed details using laser-engraving technology which makes it difficult for these coins to be duplicated using traditional coin counterfeiting methods.

The first coin in the series to have been released for circulation was actually the five-piso denomination and was issued last year on the 154th birthday of the coin’s featured personality, Andres Bonifacio (1863–1897). He is remembered in Philippine history for instigating the revolt of August 1896 against Spanish rule. Bonifacio was previously seen on the Philippines five-piso bank note. 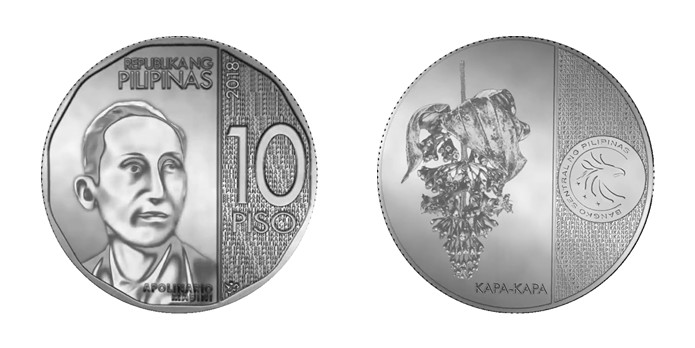 10 Piso ($U.S. 0.19): 27 millimeters with a reeded edge. Features Apolinario Mabini on the obverse and the kapa-kapa plant on its reverse. Mabini was previously seen on the 10-piso bank note.

Five Piso ($U.S. 0.095): 25 millimeters with a smooth edge. Features Andres Bonifacio on the obverse and the tayabak plant on its reverse. Bonifacio was previously seen on the Philippines five-piso bank note.

One Piso ($U.S. 0.019): 23 millimeters with an interrupted reeded and smooth edge. Features national hero Jose Rizal on the obverse and the waling-waling plant on its reverse. Jose Rizal was previously seen on the one and two-piso bank notes.

All of the sentimo-denominated coins feature a representation of the Philippine flag whose design includes three stars and a sun motif. An indigenous plant appears on the reverse of each. 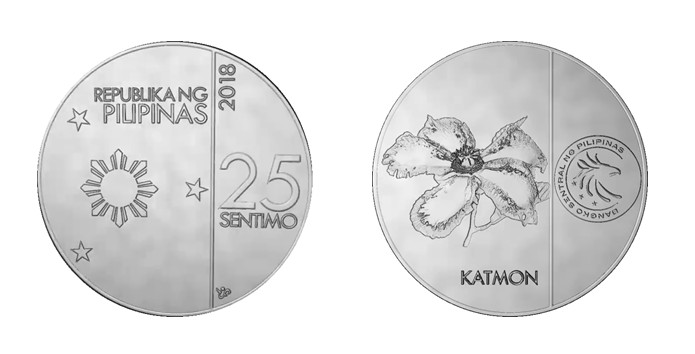 25 Sentimo: 20 millimeters with a smooth edge. The katmon flower is depicted on the reverse.

Five Sentimo: 16 millimeters with a reeded edge. The kapal-kapal baging plant is depicted on the reverse. 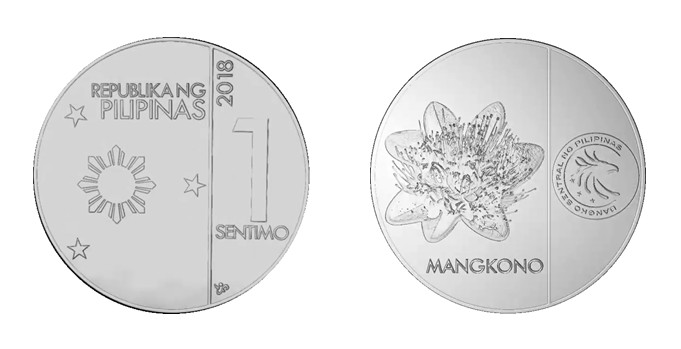 One Sentimo: 15 millimeters with a smooth edge. The mangkono flower is depicted on the reverse.

All reverse designs also include the stylised logo of the Bangko Sentral ng Pilipinas, which is positioned to the right of all the floral depictions. The BSP has begun circulating the new coins on Monday, the 26th March, however, the new generation coin series will be formally launched in July to coincide with the 24th anniversary of the central bank — which was established on the 3rd July 1993.


The current coins of the old series do not yet have a demonetization deadline. The new generation coins will be circulated along with the previous series of coins for now and will remain as legal tender until such time as the BSP calls for their demonetization. For additional information on the new coin series, please visit the website of the Central Bank of the Philippines.