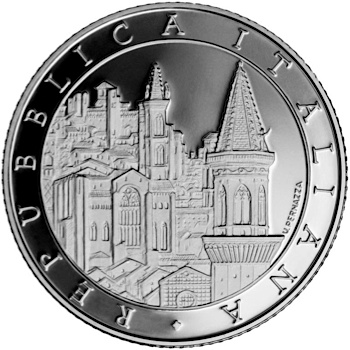 The Istituto Poligrafico Zecca della Stato (IPZS) has issued the second coin this year dedicated to its “Italy and the Arts” series. This ongoing and popular numismatic series began in 2010 and offers us an amazing insight into the many treasures Italy possesses in their museums and countless landmarks.

This 2015-dated 5 euro coin features architecture and artwork from the city of Perugia, an ancient and charming Etruscan-era city wedged in the Umbrian landscape. With its historical university and extraordinary architecture, Perugia is one of the most outstanding cultural excellences of Italy. The Medieval and Renaissance history of Perugia is still clearly perceptible in its intact, functioning, and wonderful old town, which features the magnificent mullioned windows of the Palazzo dei Priori and the ogival, or pointed arches, of the Palazzo del Capitano del Popolo. 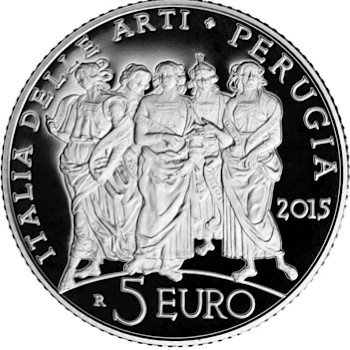 The coin, designed by Uliana Pernazza, includes on its obverse a detailed view of Perugia from a segment of the fresco called “First Transferral of the body of St. Herculanus.” The image, painted by Benedetto Bonfigli (c. 1445-1496), depicts the saint’s transfer from the place of his first burial to the church of St. Peter. This immense work was commissioned for the Chapel of the Palazzo dei Priori in Perugia; the fresco is now part of the National Gallery of Umbria. To the lower right of the primary design is the name of the designer. Along the border is the inscription REPUBBLICA ITALIANA.

On the reverse is a detail from the fresco reproducing “The Sibyls,” painted by Perugino (c. 1450-1523) for the Sala delle Udienze of the Collegio del Cambio in Perugia. The inscription ITALIA DELLE ARTI PERUGIA is placed around and above the primary design, with the letter R identifying the Mint of Rome and the value, 5 EURO, is seen below. The year 2015 is placed just to the right side of the design on the coin.

An earlier silver coin in the “Italy and the Arts” series, featuring the Riace Bronze statues and a face value of 10 euro, was issued earlier this month. For more information on this and other coins on offer from the IPZS, please visit their Web site.  Information is offered in Italian, with international orders dispatched where applicable.