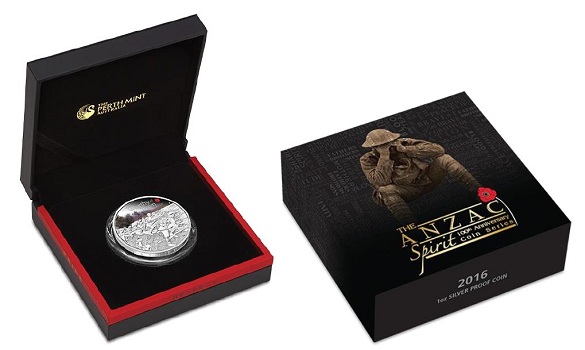 The first coin is part of the ANZAC (Australian and New Zealand Army Corps) Spirit 100th Anniversary Coin Series and commemorates the centennial of World War I’s Battle of the Somme, which took place in France and is remembered as one of the deadliest battles in history. The second issue is the 2016 Rats of Tobruk One Ounce Silver Coin, which has been released as part of the Perth Mint’s 75th Anniversary of World War II series and recalls 1941’s Siege of Tobruk in Libya. 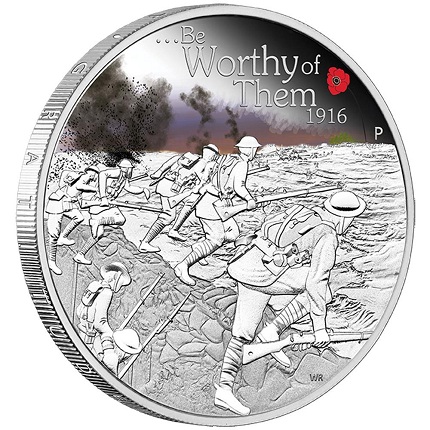 The reverse of the 2016 Be Worthy of Them 1 Ounce Silver Proof Coin carries an image of soldiers climbing up from the trenches in France’s Somme Valley during the Battle of the Somme. The battle-marked sky is rendered in color, as is a small image of a remembrance poppy, the traditional war memorial symbol inspired by John McCrae’s World War I poem, “In Flanders Fields.” Included on the reverse are the inscriptions …BE WORTHY OF THEM, 1916, and the Perth Mint’s “P” mint mark. 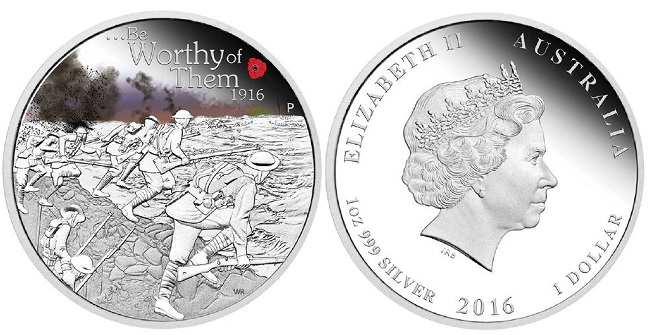 The coin’s obverse features Ian Rank-Broadley’s portrait of Queen Elizabeth II, with the inscriptions ELIZABETH II, AUSTRALIA, 1 OZ 999 SILVER, 2016, and the 1 DOLLAR placed along the rim. The edge of the coin is also inscribed with the word GRATITUDE. 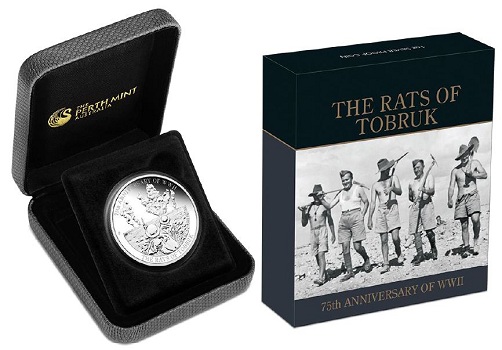 The reverse of the 2016 Rats of Tobruk One Ounce Silver Coin features an image of Australian troops fighting from the trenches in Tobruk. The inscriptions read 75th ANNIVERSARY OF WWII, THE RATS OF TOBRUK, 1 OZ 999 SILVER, and “P,” the mint mark of the Perth Mint. 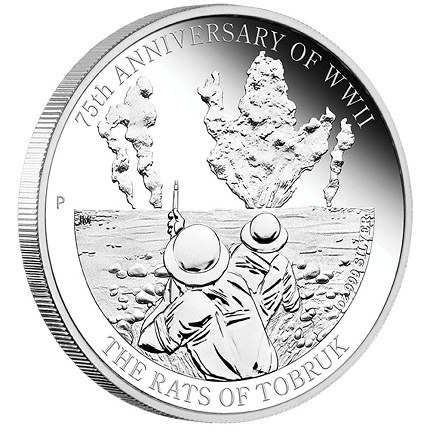 A press release points out that the Siege of Tobruk lasted from April to December, 1941, and that Australian troops accounted for more than half of Allied troops in the area, numbering around 14,000.

This obverse also features Ian Rank-Broadley’s depiction of Queen Elizabeth II. The inscriptions read ELIZABETH II, AUSTRALIA, 2016, and 1 DOLLAR. The 2016 Rats of Tobruk One Ounce Silver Coin is available for $90 AUD ($63.60 USD) and has a mintage limited to 5,000 pieces. Jennifer McKenna served as the designer.

Both of these one-ounce silver Proof coins come accompanied by a numbered certificate of authenticity. For more information on these and other new releases from the Perth Mint, please visit the Mint’s Web site.