Earlier today, the Perth Mint of Australia used Twitter to announce a 1 tonne Gold Kangaroo coin. The 1 tonne weight is equal to 1,000 kilograms or 32,150.7466 troy ounces. Based on the current market price of gold, the coin has a value of more than US$55 million based on the gold content alone. 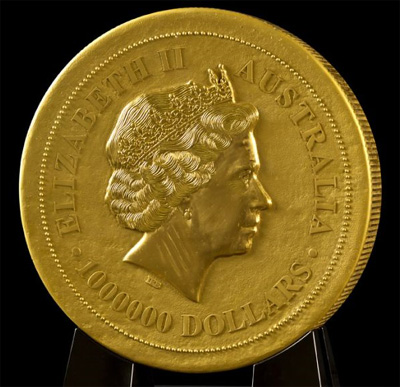 The Perth Mint’s Twitter account @perthmint was established more than two years ago, but had only posted a single tweet. The account became more active in the past week, mentioning a giveaway and some upcoming “exciting news.”

The announcement of the 1 tonne gold coin and a picture of the coin were posted in this tweet, which called it “the world’s largest gold coin.”

The obverse of the coin features Ian Rank Broadley portrait of Queen Elizabeth II and carries the face value of AU$1,000,000. The reverse design features the classic kangaroo design by Dr. Stuart Devlin AO CMG, goldsmith and jeweller to Queen Elizabeth II. The inscriptions include the “2012” date and “1 Tonne 9999 Gold”.

In a separate tweet, the Perth Mint shared the address of a website dedicated to the record breaking coin at 1tonnegoldcoin.com.