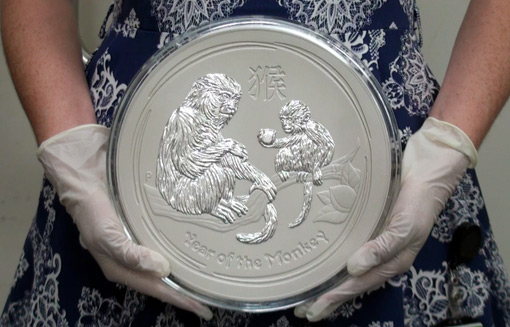 The Perth Mint announced that it will soon be selling its 2016 Year of the Monkey 10 Kilo Silver Coin on a mint-to-order basis. The Mint’s Web site notes that this item has a maximum mintage of 150 pieces.

The reverse image depicts two monkeys sitting in a peach tree; peaches are a traditional symbol of longevity and immortality. Inscribed near the rim of the coin are the Chinese character for ‘monkey’ and YEAR OF THE MONKEY, along with the Perth Mint’s ‘P’ mintmark.

The obverse features Ian Rank-Broadley’s portrait of Queen Elizabeth II, with the inscriptions ELIZABETH II, AUSTRALIA, 10 KG 999 SILVER, 2016, and the denomination of 300 DOLLARS. 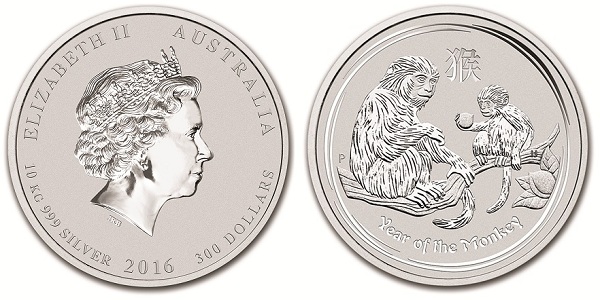 The 2016 Year of the Monkey 10 Kilo Silver Coin will be available from the Perth Mint’s authorized bullion distributors, including APMEX. For more information on the Perth Mint’s bullion program, please visit the Mint’s Web site.

You can watch a short promotional video for the 2012 releases in this series below.