The Perth Mint has announced plans to issue the Australian Platinum Platypus investment coin, available worldwide from March 1, 2011. The new offering will complement their existing gold and silver bullion products. 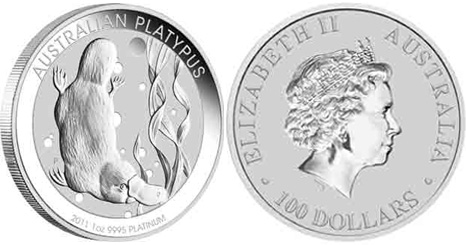 The Platinum Platypus coins will be struck from one ounce of 99.95% pure platinum. On the reverse is a depiction of the platypus diving beneath the water. The inscriptions indicate the date, bullion weight, and purity of the coin. The obverse features the Ian Rank Broadley effigy of HM Queen Elizabeth II, with an inscription indicating the legal tender face value of 100 Dollars. An identical design will be used for each year of issue.

In 2011, no more than 30,000 coins will be issued. Future annual releases will be subject to the same limit.

Perth Mint Sales and Marketing Director Ron Currie cited renewed demand for platinum as the reason for the new investment coins. The Perth Mint previously offered the Platinum Koala, across a variety of bullion weights, but the offering was withdrawn in 2000.