The Perth Mint of Australia has released the latest coins within the series which features famous captains and starships from Star Trek. The latest coins feature Captain Jean-Luc Picard and the U.S.S. Enterprise NCC-1701-D.

Gene Roddenberry’s Star Trek: The Next Generation debuted in 1987, and ran for seven seasons until 1994. Set in the Milky Way Galaxy, the first season takes place in 2364, featuring a new crew and a new starship, U.S.S. Enterprise NCC-1701-D, under commanding officer Captain Jean-Luc Picard. Picard held the position for seven years while participating in many important missions, including the defeat of the Borg invasions in 2366 and 2369, and his command of the fleet which blockaded the Klingon-Romulan border during the Klingon Civil War. 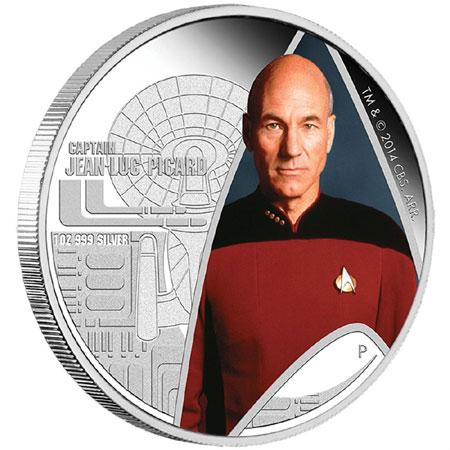 The first coin features a color image of Sir Patrick Stewart OBE as Captain Jean-Luc Picard as he appeared in Star Trek: The Next Generation, against a representation of the U.S.S. Enterprise. The inscriptions include “CAPTAIN JEAN-LUC PICARD” and “1 OZ 999 SILVER”. 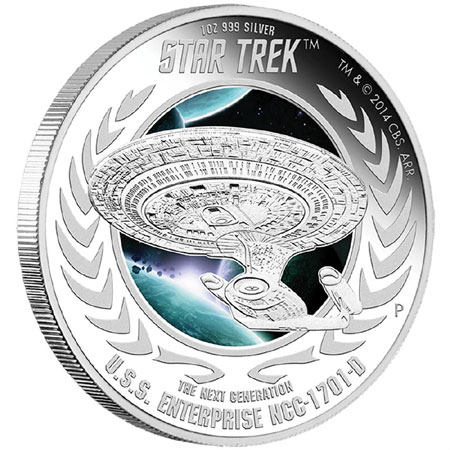 The second coin features an image of the U.S.S. Enterprise NCC-1701-D flying through space as it appeared in the television series Star Trek: The Next Generation against a colored background. The inscriptions include “STAR TREK THE NEXT GENERATION”, “U.S.S. ENTERPRISE NCC-1701-D”, and “1 OZ 999 SILVER”.

The obverse of each coin includes the Ian Rank Broadley effigy of Queen Elizabeth II with inscriptions including the monetary denomination and 2015 date. The coins are issued as legal tender under the authority of the government of Tuvalu.

Each coin is struck in 1 troy ounce of 99.9% pure silver to proof quality with a diameter of 40.60 mm. The maximum mintage for each coin is 6,500 pieces. From this amount, 5,000 are offered within individual packaging with the remaining 1,500 offered within a two coin set. 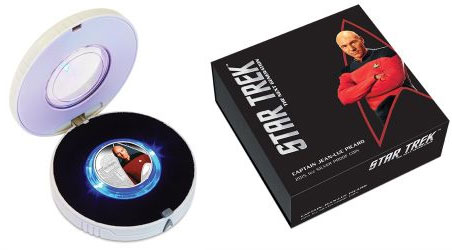 When packaged individually, the coins are presented within a Star Trek inspired case with an illustrated shipper and numbered certificate of authenticity.

When packaged as a two coin set, the case is designed to look like a Star Trek transporter. The Captain Picard coin sits inside and when the ‘door’ of the Transporter is opened, a light comes on so that the Captain appears to be teleporting. The Enterprise coin sits on top of the case in its own compartment which also lights up. The two coin set also comes with an illustrated shipper and numbered certificate of authenticity.

For additional information on the Captain Jean-Luc Picard and U.S.S. Enterprise NCC-1701-D coins or to place an order, please visit the Perth Mint product page.