The Perth Mint of Australia has released a one ounce silver proof coin to commemorate the 100th anniversary of the RMS Titanic. The coin is issued under the authority of the Government of Tuvalu and carries a limited mintage of 5,000 pieces. 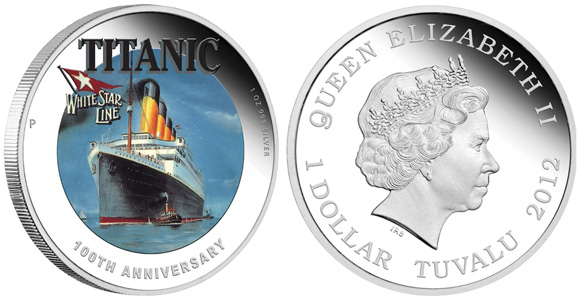 The design for the coin depicts the Titanic as seen on an original White Star Line’s poster. In a color representation, the ship is set against the ocean and sky with “Titanic” and “White Star Line” incorporated. Inscriptions around the outer circumference include “100th Anniversary”, “1 oz 999 Silver”, and the Perth Mint’s “P” mint mark. 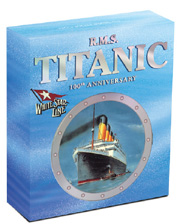 Each coin contains one troy ounce of silver with a diameter of 40.60 mm and thickness of 4.00 mm. No more than 5,000 of the coins will be released.

The coin is presented in a display case with an illustrated shipper and accompanied by a numbered Certificate of Authenticity. Pricing for the coins is $107.00 each, which includes a GST component of $9.72.

For orders and further information, please visit the