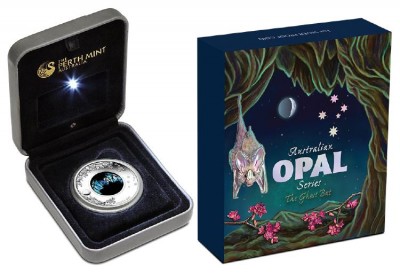 According to a Perth Mint press release, the Ghost Bat—so named for its translucent, “ghostly” wings—is the only carnivorous bat in Australia. 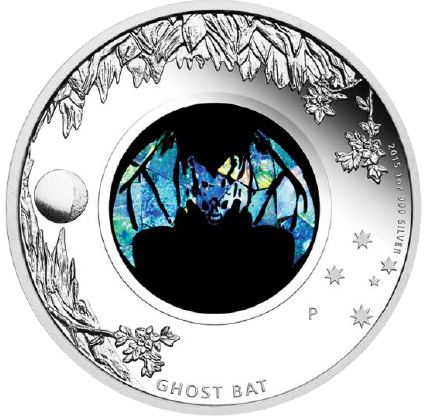 The coin’s reverse features a depiction of a flying Ghost Bat, rendered in varying shades of opal. Surrounding this is an image of a wall and ceiling of a craggy cave along with Kurrajong flowers, sculpted in silver. The inscriptions GHOST BAT, 2015, 1 oz 999 SILVER, and the Perth Mint’s “P” mintmark curve along the coin’s rim.

The reverse displays Ian Rank-Broadley’s portrait of Queen Elizabeth II, with AUSTRALIA, ELIZABETH II, and 1 DOLLAR circling the outside of the design. The coin stretches 36.60 mm in diameter, is 4.5 mm thick, and weighs 31.135 grams. Its display case includes a light that turns on as the lid is opened, “to represent the moon shining down on the nocturnal creature.” The box also includes a Certificate of Authenticity. 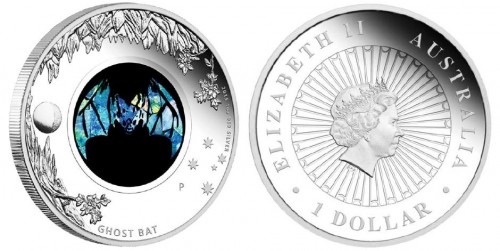 The Ghost Bat follows the Rough-Scaled Python coin as the second 2015 release in the Australian Opal Series. For more information on the Ghost Bat 1 oz. Silver Proof Coin, or other available coins in the opal series, visit the Perth Mint’s Web site.