On December 5, 2011, the Perth Mint of Australia released the 2012 Australian Platinum Platypus bullion coins. The one ounce coins are struck in .9995 pure platinum and have a limited mintage. 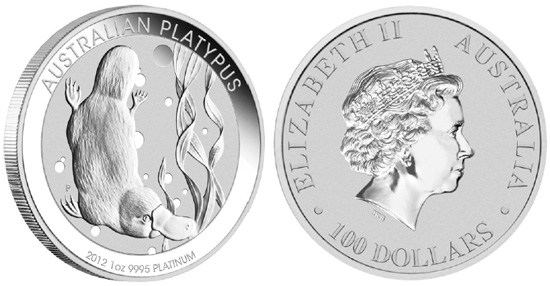 The reverse of the coins designed by Natasha Muhl features the iconic platypus in an underwater scene with oxygen bubbles and plant life. Inscriptions around the outer edge include “Australian Platypus”, the date “2012”, and “1oz 9995 Platinum”. The obverse design contains the Ian Rank-Broadley effigy of Queen Elizabeth II, with an inscription of the legal tender value of “100 Dollars”.

The Platinum Platypus bullion series was introduced last year on March 1, 2011. The first issue with a maximum mintage of 30,000 has sold out. The Perth Mint previously offered the Platinum Koala bullion series, but the offering was withdrawn in 2000.

The other major world mint with a current platinum bullion series is the Royal Canadian Mint, which offers the Platinum Maple Leaf. The United States Mint has traditionally offered the American Platinum Eagle in bullion format, however since 2009 only numismatic versions have been issued.