Today May 4, 2010, the Perth Mint will release the 2010 Australian Gold Proof Sovereign. The Perth Mint had resumed the production of the sovereign in 2009 after a 78 year hiatus. During the 19th and early 20th centuries, more than 106 million sovereigns had been produced in Perth. 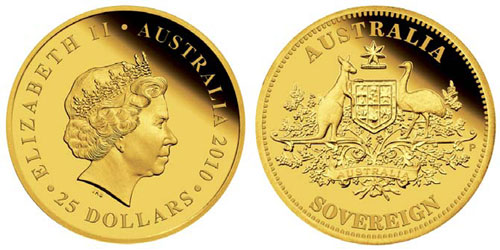 The 2010 Australian Gold Sovereign features the Australian Commonwealth Coat of Arms on the reverse. This consists of the badges of the six States of the Commonwealth on a shield supported by a kangaroo and an emu. The Coat of Arms appears on a background of golden wattle with a scroll bearing the word “Australia”. The inscription “Australia” appears above and “Sovereign” appears below.

The obverse of the coin features the effigy of Queen Elizabeth II with inscriptions “Elizabeth II”, “Australia”, the legal tender face value “25 Dollars”, and the date “2010”.

Each coin is struck with a composition of 22 karat gold (91.67% purity) with a metal content of 0.2354 troy ounces. The coins are housed in a timber presentation case with an illustrated shipper and numbered Certificate of Authenticity.