The Perth Mint of Australia has started accepting orders for recreations of the famous Port Phillip Kangaroo Gold Medallions. These proof quality replicas are made in partnership with the Smithsonian Institution and come certified by the Numismatic Guaranty Corporation (NGC) in the top grade of PF 70 Ultra Cameo.

The story of the original strikes represents a celebrated piece of Australian numismatic history. The Port Phillip Kangaroo Office was established at the height of the Australian Gold Rush in the mid 19th century when there was an apparent opportunity to purchase nuggets on the gold fields at a discount and then issue the same as hard currency in the form of minted gold tokens. A coin press was dispatched in a clipper called Kangaroo, but due to the primitive docking facilities, the press had to be dismantled, brought ashore, and reassembled at the site secured for the mint. By this time, the previous opportunity had passed as gold had become more expensive and a large number of official sovereigns had arrived in the colony. The Office would close after producing only a limited output, creating one of the great rarities of Australian numismatics.

The replica medallions feature a kangaroo in a standing pose with the 1853 date. A patterned border includes “Port Phillip” and “Australia”. The Perth Mint’s special anniversary mint mark of “P2012″ is also present. The reverse design is a replica of the historic Port Phillip Kangaroo medallion with a large numeral indicating the weight at center. A patterned border contains “Pure Australian Gold” and an indication of the precious metal weight.

The Perth Mint will release no more than 500 Port Phillip Kangaroo Gold Proof Replica Four Medallion Collections containing one example of each medallion. The 2 oz medallion carries a maximum mintage of 500, while the 1 oz, 1/2 oz and 1/4 oz medallions each carrying a mintage of 2,500. An individual 1/4 oz medallion is currently offered with an issue limit of 2,000 pieces. 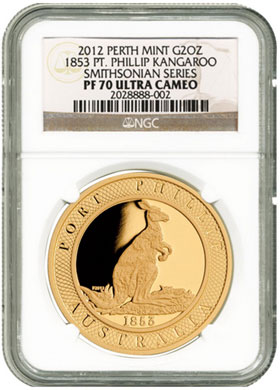 Each medallion comes certified by NGC and encapsulated for protection and secured in an inert plastic holder featuring a security hologram, bar code, and identification number. The medallions are all graded as NGC PF 70 Ultra Cameo, the highest grade awarded by NGC. Both the four medallion set and individual 1/4 oz medallion are presented in a prestigious glass and timber display cases, accompanied by an informative story card.

For additional information or to place an order, please visit the Perth Mint product pages for the four medallion set or individual 1/4 oz medallion.