Earlier this month, the Perth Mint launched the first coin in a new series entitled Australian Age of Dinosaurs. Representing Australia’s most complete carnivorous dinosaur, Australovenator (meaning “southern hunter”) is the first creature to appear within the series. 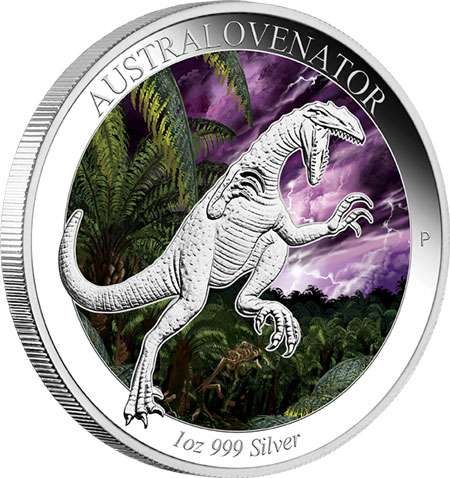 “The Perth Mint is delighted to be transporting coin collectors on a 100 million year journey back to the Cretaceous Period with the release of this fantastic coin program,” said Perth Mint Sales and Marketing Director, Ron Currie.

Fossils of Australovenator were discovered in 2009 in what was once an ancient billabong near Winton, western Queensland. The discovery which includes the greatest concentration of dinosaur bones ever found in Australia to date was made by the Australian Age of Dinosaurs Museum, a not-for-profit organization that is spearheading dinosaur discovery and research projects in outback Australia.

Studies of the bones have revealed that Australovenator is a unique species to Australia.  However, it shares many features with theropod dinosaurs found around the world, including Allosaurus (United States of America), Fukuiraptor (Japan), Megaraptor (Argentina) and Neovenator (United Kingdom).

The reverse design of the coin features the Australovenator set against a colored prehistoric scene. The inscriptions include AUSTRALOVENATOR, the weight and purity of the coin, and the Perth Mint’s “P” mint mark. On the obverse is the Ian Rank-Broadley effigy of Queen Elizabeth II with the 2014-date, and monetary denomination.

The coins are issued as legal tender under the Australian Currency Act 1965 and struck from 1 troy ounce of 99.9% silver to proof quality. The Perth Mint has indicated a maximum mintage of 5,000 coins.

For more information or to place an order, please visit the Perth Mint product page.