The Perth Mint has issued a limited mintage set of collectible coins inspired by five famous ballets. The set of five one ounce silver coins feature scenes from Don Quixote, The Sleeping Beauty, The Nutcracker, Swan Lake, and Cinderella. 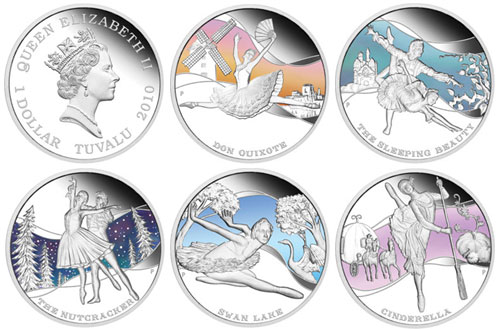 The reverse of each coin features a scene from each ballet against a colored colored background designed by Aleysha Howarth. The Perth Mint’s “P” mint mark is also incorporated. A description of each reverse design follows:

The obverse of each coin bears the Raphael Maklouf effigy of Her Majesty Queen Elizabeth II with the “2010” date and legal tender value.

Each coin contains one ounce of .999 fine silver and is legal tender under the authority of the Government of Tuvalu.

The Perth Mint offers the coins in complete five coin proof sets, with a mintage limit of just 2,500. Each set includes a numbered certificate of authenticity and is housed in a presentation case with illustrated shipper. The offering is priced at AUD $406.82.