The Perth Mint of Australia has reported their latest monthly sales figures for gold and silver sold as coins and minted products. Both gold and silver showed a decline from the prior month, but remained well above lows reached earlier in the year.

Monthly sales figures have only been reported since March 2012, so prior year comparisons cannot yet be made. 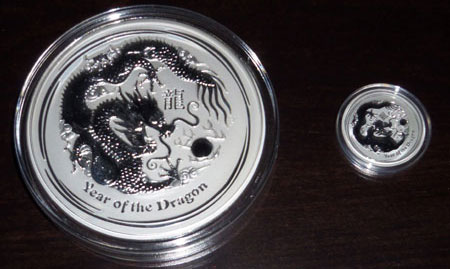 Gold bullion sales for July 2012 were 34,026.23 toy ounces. This represented a decline of 23.74% from the previous month. The total ranked as the third highest out of the five months of figures available.

Silver bullion sales were 452,692.79 troy ounces, representing a decline of 13.55% from the previous month. This total also ranked as the third highest out of the five months of figures available.

The monthly decline may be attributable at least in part to the upcoming release of the Perth Mint’s first 2013-dated gold and silver bullion coins. The 2013 Australian Lunar II Year of the Snake Coins as well as the 2013 Australian Kookaburra Silver Bullion Coins are scheduled for release on September 3, 2012.

Although a history of data is not available for Perth Mint bullion coins, for United States Mint bullion coins, monthly sales typically experience a spike to coincide with new releases, which can sometimes be preceded by a sales lull in the prior months.