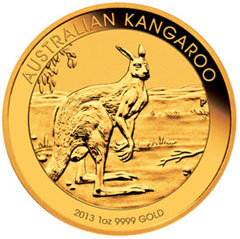 The Perth Mint has provided the latest monthly figures indicating the amount of gold and silver sold as coins and minted products. For February 2013, sales for each metal dipped to their lowest monthly level since August.

Year over year comparisons are not yet available since the Perth Mint only began publicly reporting sales levels in March 2012. Starting next month, such comparisons will be possible.

Sales of gold as coins and minted products reached 44,048.62 troy ounces. This represented a decline of 32.9% from the previous month, which had experienced a boost in sales for the start of the new year.

Sales of silver as coins and minted products reached 426,319.29 troy ounces. This was a decline of 36.4% from the previous month.